June Crowley is a woman who was in the hospital for a long-awaited liver transplant.

After spending three years on the waiting list, a liver finally became available and was allocated to June. Her entire family came to the hospital to wish her well on the day of her surgery. However, before the transplant could take place, another patient, Chelsea Keen, came in whose condition was more immediately life-threatening. They doctors went to June to ask her to consider declining the liver, meaning it could be re-allocated to Chelsea. To their surprise, she said no and decided that she would get the liver. Her surgery went forward and her family was told that the transplant went well and while they had to look for signs of rejection, everything looked okay so far.

She has a large family that all came to support her on the day of her surgery. 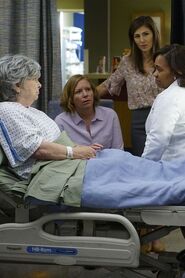 Retrieved from "https://greysanatomy.fandom.com/wiki/June_Crowley?oldid=257355"
Community content is available under CC-BY-SA unless otherwise noted.