Some Kind of Tomorrow

Kai Bartley is a neuroscientist working for David Hamilton at The Grey Center.

Kai is a neuroscientist doing stem cell research. Amelia and Meredith were both familiar with their work. They met Meredith and Amelia when they came to Minnesota to hear David Hamilton's pitch for them to work together to cure Parkinson's Disease. ("Some Kind of Tomorrow")

Kai continued to work with Amelia after Amelia returned to Seattle, using video calls to share research. Kai then asked if Amelia could return to Minnesota soon to help them work out some kinks. Amelia said she would. Kai then helped Amelia get some relief from the heat by having her imagine being somewhere very cold. ("Hotter Than Hell")

Their research continued when Amelia and Meredith returned to Minnesota, along with newly-recruited Tom Koracick. In order to get approval for the next step, they first had to prove to the FDA that the cells would survive, so they began running trials to figure out a way to keep the cells from dying with the help of some gel brains provided by Tom. ("Bottle Up and Explode!")

On Thanksgiving, they sent Amelia a video, taken the night before, of a mechanized injector that allowed them to inject the cells without them clumping. ("Everyday Is a Holiday (With You)")

When David fell, he put pressure on the team to work more quickly to meet the FDA's requirements to get compassionate release so he could get treated soon. Kai, Gavin, and Amelia ran trial after trial all day, trying various things to improve cell viability. When several trials failed, Kai took a fifteen minute break and got some chips. They and Amelia talked about the project while walking around. Amelia asked if Kai had ever worked on something for years that ultimately didn't go anywhere. They said no, but they had done months. Afteward, they rented a house in Hawaii for the summer, learned to surf and grow their own pineapple, then came back and started again. Finally, Amelia had the idea to cool the needle they were using to inject the cells to keep them cool. They tried various temperatures and one gave them 92% cell viability, enough to satisfy the FDA and allow for compassionate use. ("Today Was a Fairytale")

The FDA gave them a small window to do the surgery. Knowing that doing it in Minnesota would draw too much attention, Kai and David flew to Seattle to do the surgery at Grey Sloan instead. However, Kai determined that David had a low-grade fever, forcing them to cancel his surgery. The fever turned out to be due to a perforated bowel, so he had surgery on that instead. ("It Came Upon a Midnight Clear")

David's surgery went well, but both Meredith and Kai admonished him for not admitting to the pain sooner, as it jeopardized all their work. ("No Time to Die")

When Hamilton was sufficiently healed from his abdominal surgery, they prepared to do the experimental treatment. On the day of, Kai said all the cells were within the temperature range. Once everything was ready, Hamilton was taken to the OR. Hamilton had wanted the surgery to be private, but Meredith told him it was a teaching hospital, so she wanted to open the surgery up to all hospital staff to watch, which many of them did. As they did the final preparations, Kai awkwardly explained what they'd done to the residents. Then they proceeded with the surgery. There was a brief hiccup when Amelia was paged for another surgery, but Tom went in her place, allowing her to continue. The rest of the surgery went forward without incident. After it was over, Kai wondered how Amelia could have even considered leaving the OR until they realized that Amelia loves so deeply and fiercely. ("Legacy")

With the surgery a success, Kai and Amelia worked together to complete their report. They decided they needed to make Hamilton's bowel obstruction seem less like his own fault, so they carefully worded that section of the report. Once they were finished, Kai invited Amelia to a show, where they performed with their band. At the end of the night, Amelia went home with Kai and they had sex. The next morning, Kai told Amelia she could stay, but Amelia said she had to leave because she's a mom and she missed her son whenever she was in Minnesota. ("The Makings of You")

When David surprised Meredith with a job offer after she presented his case to the staff at the Mayo Clinic, Kai encouraged her to consider it, saying that David was really a kind, supportive guy. Kai knew him before they changed their name and pronouns and he never once mixed up and said they were brave and that he was proud of them. ("Put the Squeeze On Me")

Kai and David came to Seattle on Richard's request to test his skills to see if he needed to retire. Before the testing started, Kai talked to Amelia, who said that Richard needed to pass the test. The testing began and took several hours. The testing was interrupted when Richard got a call from Levi Schmitt and left to help him treat his mother, causing Kai to question his judgment, as he hadn't said a word to them before leaving. While Richard spoke to Jamarah Blake and MaryAnn Suchan about the residency program, they taped Levi Schmitt speaking about his own experience with the team. Richard then returned to the testing room and completed his tests. Kai told him he'd passed. ("Put It to the Test")

Kai and Amelia began flirting with each other shortly after their first meeting. ("Some Kind of Tomorrow")

Finally, one night, they each attempted to be the last person out of the lab. Kai said they were typically the last one to leave, but agreed to leave first so Amelia could win some points with Hamilton. Before they left, Kai asked about Amelia's family, whom Tom had mentioned. Amelia told Kai about her son and his dad, but then said she was single. Kai said they were also single. ("Bottle Up and Explode!")

After a major breakthrough in their research, they asked Amelia to go get dinner, but Amelia had to catch a flight back to Seattle. ("Today Was a Fairytale")

When Kai and David came to Seattle for David's surgery, Kai and Amelia kissed outside the hospital after Amelia used guided meditation to help Kai calm down. ("It Came Upon a Midnight Clear")

After Owen's surgery, Kai met Amelia at Joe's, where Amelia explained that her life was messy. ("No Time to Die")

Once Hamilton's surgery was successfully completed, Kai and Amelia worked together to finish their report. They finished and then Kai invited Amelia to their band's performance. After the performance, Amelia went home with Kai and they had sex. The next morning, Kai told Amelia she didn't have to leave, but Amelia insisted that she did because she was a mom who missed her son. ("The Makings of You")

Their mother wanted them to go to medical school. ("Today Was a Fairytale")

They have a sister with children. Their grandmother constantly nags them about having children. ("The Makings of You")

They are a neuroscientist working at The Grey Center within The Mayo Clinic in Rochester, MN. 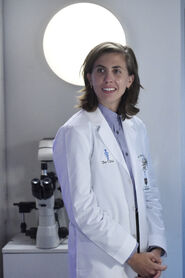