In Which Sam Gets Taken for a Ride

Kevin Nelson is a police officer and ex-boyfriend of Addison Forbes Montgomery.

Kevin came to the practice to support Susan McCullough, his late partner's wife, who was giving birth. She declined to let him in the labor and delivery room because she wanted it to be about the baby and felt Kevin would make it about Jason. However, he and several other cops decided to wait out in the lobby to support her. After the baby was born, Addison brought him out to introduce him to his father's co-workers. At the end of the day, Kevin asked Addison out on a date, but she declined, saying she already had plans. ("In Which Sam Gets Taken for a Ride")

Kevin came back to the practice to have a physical done. He came back to get the results of his physical to turn into his work. He also interacted with Addison while he was there. After that meeting, Addison went to the police department to find him. ("In Which Dell Finds His Fight")

Kevin agreed to go on a date with Addison, but he didn't call her, so she believed he was blowing her off. However, he showed up at the practice two weeks later and showed her that he wasn't blowing her off. He had training. He had been selected to join the SWAT team. Addison brushed him off, but he later showed up at her house to ask her out on a date. ("A Family Thing")

Worried that Kevin might be cheating on her, Addison followed Kevin in her car. She followed him right into a tenuous work situation and she was arrested because of her proximity. This prompted a discussion about trust between the two. ("Serving Two Masters")

Kevin and Addison returned from a date to find that someone was in her house. Kevin pulled his gun, but it turned out to be Addison's brother, Archer Montgomery. Kevin and Archer butted heads because Archer didn't believe that Kevin was rich or cultured enough for his sister. Kevin was shocked to learn that Addison has a $25 million trust fund at a party. He then asked to leave early and didn't call Addison afterward. ("Tempting Faith")

Addison later got a call that Kevin had been shot on the job. She observed his surgery as another doctor removed the bullet. After his surgery, Addison visited him. He talked about how he didn't fit into her life and didn't feel comfortable there. Addison said that she hadn't once said he wasn't good enough and told him not to give up on them. ("Tempting Faith")

After he was released from the hospital, he stayed at Addison's place and she took care of him. He objected that he didn't want to feel like an invalid, but Addison said that he wasn't a burden. ("Crime and Punishment")

He grew bored of bed rest and decided to get up and go around doing things. Addison admonished him for that. Addison later came home to find him sitting at the bottom of the steps, unable to get up. She helped him up the stairs. ("Know When to Fold")

Once he had recovered, Kevin talked about going back to his place because he had dishes in the sink. Addison hired a cleaning lady to take care of the mess. When Kevin found out, he was upset. He also disagreed with Addison treated college call girls, saying that once you get into that life, it's hard to get out and believing Addison was enabling them by not counseling them to stop. He later gave Addison money to repay her for the cleaning lady and gardener and left her house to go home. ("Worlds Apart")

When Violet was looking for someone to talk to about whether or not Doug Adams killed his wife in cold blood, Addison sent her to Kevin. He said he'd never seen a women who killed herself or asked to be killed with a gun. ("Crime and Punishment")

Addison met Kevin as part of the police force that came to visit one of Addison's pregnant patient who had just given birth (and whose husband was killed in the line of duty). Kevin asked Addison out on a date. She declined, saying she had plans. ("In Which Sam Gets Taken for a Ride")

They met again when Kevin came to the practice for a physical. After a few interactions, Addison went to the police department to find him. ("In Which Dell Finds His Fight")

Kevin did not call Addison back after their date for a while and she grew agitated, but she later discovered he was training to be a SWAT officer. He showed up to her house to ask her out again. ("A Family Thing")

Addison was worried about Kevin not calling her after a date. She eventually called him and left a rambling message. ("Equal and Opposite")

Addison later saw Kevin outside the hospital. He apologized for being inconsistent and said he was there to woo her. He brought her donuts and said he shouldn't write her off. They also had burgers in between Addison's surgeries. He later took her to the shooting range to fire a gun. ("Nothing to Talk About")

They continued seeing each other, but didn't have sex. Addison didn't want to rush into anything. Kevin invited her for a weekend in Cabo San Lucas. Addison said she had rules now and didn't want to break them. She told him about her rules and said she wanted to wait until it felt right. He said he was okay with waiting. Despite the rules, Addison later called Kevin to her house and they had sex. ("Past Tense")

Two weeks later, Kevin and Addison were still together and Kevin spent many nights with her as she struggled to figure out how to save the practice. He helped her talk through ideas. ("Let It Go")

Their relationship went well until Kevin told Addison that he loved her, which startled her. Because of her trust issues from cheating on Derek and being cheated on, Addison looked through Kevin's phone after he mentioned that many guys on the force were cheating on their significant others. She saw many calls from a "Leslie," which raised her suspicion. She followed him around and got herself arrested when she came upon a serious work situation. He sat in the back of the car with him and explained that Leslie was a man and one of his co-workers, though he was upset that Addison didn't trust him. Kevin later came to her house asking for an explanation. She explained her history with Derek and said she wasn't ready to say she loved him, but if he stuck around, she'd get there because he's honestly and loyal and worthy of trust. ("Serving Two Masters")

Addison's brother immediately took a dislike to Kevin, his first words to him being "[A] Forbes-Montgomery dating a cop." And he later told Kevin that Addison was just enjoying him, though Addison assured him that wasn't true. ("Tempting Faith")

Their relationship hit another snag when Addison paid for a cleaning lady and gardner to clean up Kevin's home while he was nearing the end of his recovery from a gunshot. It made him realize how different their worlds were. He later repaid her for those services and left her house. ("Worlds Apart")

He returned to her place, but she said that things felt different. As they ate dinner together, he was upset because she said she had to do cystic fibrosis research for a patient instead of spending more time with him. ("Homeward Bound")

Kevin got suspicious about Addison returning home late after work. He kept insisting, telling Addison he's a cop and he's learned when people are lying. Eventually he let it go and apologizes, only for Addison to admit to kissing another man and Kevin left. ("Nothing to Fear")

Addison initially met Kevin as a police officer, but after he didn't call her back after a great date, she began to wonder why. Kevin eventually returned, telling her he was training to become a SWAT officer. 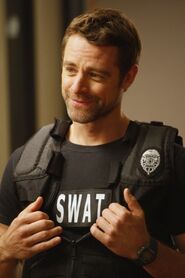 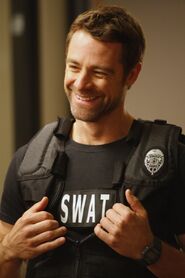 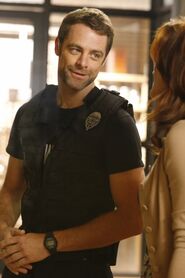 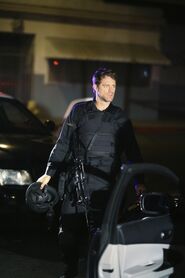 Retrieved from "https://greysanatomy.fandom.com/wiki/Kevin_Nelson?oldid=270140"
Community content is available under CC-BY-SA unless otherwise noted.