Kimmie Park is a girl with an inoperable brain tumor.

Kimmie had a recurrent brain tumor. She'd had it removed a year prior and was back at the hospital for her follow-up CT. The CT showed that the tumor was back, meaning she needed to have awake brain surgery so they could monitor her function as they worked. While in surgery, she was able to sing, her passion, but wasn't able to speak normally when the edge of the tumor was stimulated, meaning she'd lose her ability to speak if they operated. They told Peg about this and Peg challenged them to go back to their research and find another option, because Kimmie faced everything with a smile and they should do better for her. They had an idea to use frequency waves to treat shatter her tumor without damaging the surrounding tissue, but while they developed the technology, she had to have more radiation and chemotherapy to treat the cancer. Even though she knew she'd be bald by fall with chemotherapy and radiation, she kept a smile on her face, despite wanting to be able to audition for a musical and beat out Susie Oppenheimer. ("Harder, Better, Faster, Stronger")

The doctors continued their research to look for a cure for Kimmie as she continued to deteriorate. Despite her failing health, Kimmie didn't lose hope and still happily sang in her hospital room with Alex and debated the best musicals with Tom Koracick. ("You Really Got a Hold on Me")

While undergoing chemotherapy, Kimmie had trouble keeping any food down, so they wanted to place an NG tube. Kimmie didn't want that, so she asked for medical marijuana in the form of oil instead. She said it had been Peg's idea. Alex got the paperwork filled out to get the use approved, but when he went to Peg about it, she was against it, because both Kimmie's parents had been addicted. She fired Alex and decided she wanted to move Kimmie to another hospital for treatment. However, Alex went to her personally and explained to her the benefits of using medical marijuana over conventional medicine. She agreed and Kimmie was given the oil, which greatly helped her nausea. ("Games People Play")

Kimmie began to lose hope as she continued her treatment. After treating Noah with the laser treatment, Tom and Amelia decided Kimmie couldn't wait for it to be honed to work for her type of tumor and decided to develop a treatment plan that would allow her to live until summer, when Tom would take her and Peg to New York and see as many Broadway shows as they could before she died. ("Hold Back the River")

Kimmie decided to go with her grandma to New York to see all the shows she could in her final weeks. She wanted to watch them live and immerse in the experience rather than watching them on her laptop. Alex opposed to this as he wanted to see her survive, but she left with her grandmother while he was in surgery. They ran into Jo and asked her to let him know, specifically requesting she tell him that she was smiling as she left. (“Beautiful Dreamer”)

Her birth parents never took an interest in her, so she was raised by Peg, her grandmother.

Kimmie had a friend that invited her to come to New York with her and her family during summer. 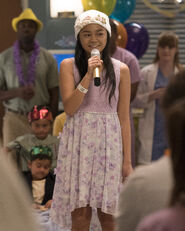 Retrieved from "https://greysanatomy.fandom.com/wiki/Kimmie_Park?oldid=278380"
Community content is available under CC-BY-SA unless otherwise noted.