I Wear the Face

Kyle Diaz was a musician with MS. He briefly dated Stephanie Edwards.

Kyle had been diagnosed two years prior with multiple sclerosis. One of his symptoms was a hand tremor, which had recently shown up. Because of his career as a guitarist, he came to the hospital to have deep brain stimulation to stop the tremor. The tremor had started right as he landed a 13-city tour as the opening act. He was shocked to learn that he'd be awake and playing the guitar during his surgery.

They started the procedure and Kyle played as they tested different areas. When Kyle's face started to droop, they realized he had a slight brain bleed. They repaired the bleeding and he played guitar for them so they could target the DBS to treat his tremor.

After his procedure, Kyle was awake and stable. He talked to Stephanie about her professional jealousy, saying he'd experienced that on the other end himself. He then decided to sleep as she stayed to watch him as she'd been assigned to do. ("I Wear the Face")

When Kyle developed another tremor, this time in his left hand, Stephanie made him come in. He was worried about missing his last three tour dates, but he was told his tremor would get worse if they didn't treat it immediately. When an MRI showed an abnormality, they planned a second round of DBS. It was successfully performed. ("You're Gonna Need Someone on Your Side")

Kyle later returned to the ER with what looked like meningitis. ("Mama Tried")

To be treated for the infection, Kyle had to have his implant removed, which brought back his tremor. He was aggressively treated, but the infection started spreading to his ventricles, so he needed drainage and washout to clean out the infection. He was taken in for surgery, but he started to code and was pronounced dead in the OR. ("At Last")

He heavily flirted with Stephanie Edwards during his hospitalization. ("I Wear the Face")

She agreed to text him during his tour and said they might be able to go out when he got back. They ended up exchanging dirty texts. ("It's Alright, Ma (I'm Only Bleeding)")

When Kyle came back into town, he asked Stephanie to go out with him. She tried to decline, worried that what they had was all texts, but he showed up at the hospital and she agreed to go with him when he said he wanted to take her somewhere special. She went with him to a recording studio, where they started to kiss and then undress and had sex. ("Trigger Happy")

They continued to see each other, though without labelling their relationship. When Kyle developed a tremor in his other hand, Stephanie told him to go to the hospital, where she stayed by his side as he waited for surgery, and waited in the waiting room while he was in surgery. After his surgery, she came to visit him before he woke up and left a note, ending things between them. ("You're Gonna Need Someone on Your Side")

When Kyle came to the ER with what looked like meningitis, he was insistent that he didn't want Stephanie as his doctor. ("Mama Tried")

When he ended up back in the hospital with meningitis, he initially tried to push her away, but they reconciled briefly and he tried to convince her to come with him to his European concerts. However, shortly after this, he was taken into surgery, where he died while she watched from the gallery. ("At Last")

His mother and sister are very protective of him. When they came to the hospital when he had meningitis, they shooed Stephanie upon figuring out who she was. ("At Last")

He said he had several friends who also dreamed of stardom. When he started to get successful, they got jealous, and he realized they weren't really his friends, but his competition. ("I Wear the Face")

He is a guitarist. His multi-city tour was interrupted due to his illness. 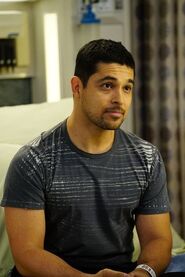 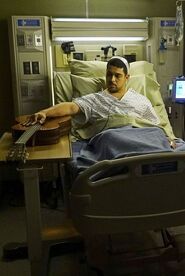 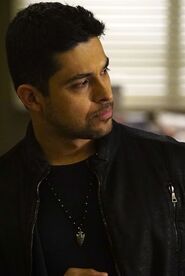 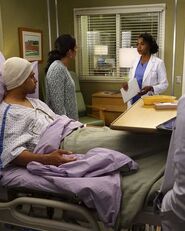 Retrieved from "https://greysanatomy.fandom.com/wiki/Kyle_Diaz?oldid=320358"
Community content is available under CC-BY-SA unless otherwise noted.