Do You Believe in Magic

Hilarie Burton
Lauren Boswell is a craniofacial surgeon who once consulted on a case at Grey Sloan Memorial Hospital. She worked closely together with Dr. Arizona Robbins, whom she showed romantic interest in and whom she eventually ended up having a one-night stand with.

Lauren was in Seattle to work on the case of Tyler Sims, who had an encephalocele. She planned to operate on him with Jackson Avery and Arizona Robbins. ("Do You Believe in Magic")

The surgery went well. Lauren coached Arizona and Jackson through most of it and Tyler's parents were informed that he'd only be left with a small scar on his forehead. ("Readiness is All")

After their first day working together on the Tyler Sims case, Lauren and Arizona met up in an elevator. Lauren began to flirt with Arizona until Arizona interrupted, saying that she's happily married and noting that Lauren had met her wife and that she only had one leg. Lauren says that she knows that already, as there's only one Arizona Robbins on the internet. ("Do You Believe in Magic")

As they prepared for Tyler's surgery, Lauren continued to flirt with Arizona, even suggesting they get coffee before the surgery. After Tyler's surgery, Lauren asked Arizona to show her to an on-call room, so she could sleep nearby the first night after surgery. However, once they were in the room and Arizona tried to say goodbye, the power went out and they began to kiss. Arizona initially pulled away, reiterating that she's married. But Lauren told her that she is allowed to lose a little bit of control and Arizona leaned back in and they started to kiss again. ("Readiness is All")

After the power came back on in the hospital, Callie came to find Arizona and saw Arizona talking to Lauren. She noticed that Arizona's wedding ring was pinned to the scrub top Lauren was wearing. Despite Lauren coming up with a lie, Callie figured out what had happened. ("Perfect Storm")

Despite being told by Arizona to stay in the on-call room, Lauren came back to the NICU, where only two nurses had made it in for their shifts, leaving them understaffed. Lauren helped bag and manually ventilate the babies in the NICU. ("Perfect Storm")

After the storm ended, the airport reopened and Jackson put her in a cab so she could catch her plane. ("Seal Our Fate")

During her brief time at Grey Sloan Memorial, she displayed a playful, flirty disposition, openly flirting with Arizona. She was also highly encouraging toward Jackson. She took a collaborative approach to the surgical case, allowing Arizona to take a part of the surgery and encouraging Jackson to take another part. Jackson remarked that Lauren was similar to Mark in her ability to mentor in a way that made him feel capable. She openly admitted to being a control freak, but sees this as a positive quality.

When she arrived at Grey Sloan Memorial Hospital, she took an immediate liking to Arizona and flirted with her. Despite learning via Google search that Arizona was married and had lost her leg, she continued to pursue Arizona. After the surgery on Tyler is completed, she asks Arizona to show her an on-call room. She and Arizona have sex. After a stressful day in the NICU, Lauren told Arizona she had feelings for her, saying, "I'm not just gonna leave things like this... I like you. A lot." However, Arizona told Lauren that she had made a mistake, effectively ending their relationship, even before Callie finds out.

Dr. Lauren Boswell is a board certified plastic surgeon specializing in craniofacial surgery. She is considered one of the best in her field, as she flies around the world to assist other surgeons. 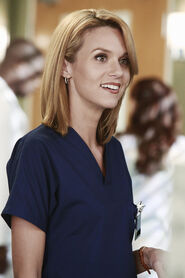 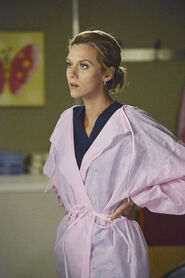