Save the Last Dance for Me

Lauren Riley is a master diagnostician whom Andrew brought up from UCSF to diagnose Suzanne Britland.

Andrew lured Lauren up from UCSF claiming that Suzanne was Meredith's patient. When she arrived, she first went to meet with Suzanne and explained to her how she would work methodically to figure out what was wrong with Suzanne. She oversaw as Suzanne got a pericardial window to release the fluid buildup around her heart and then asked Suzanne's permission to remove all treatments, all medications, so that she could look for things and were hiddnen by the medications. After some reluctance, Suzanne consented. ("Save the Last Dance for Me")

Suzanne's previously treated symptoms started to appear again, causing discomfort. They continued to run tests, which still didn't show anything conclusive. During this time, Meredith expressed concern that Lauren was overworking Andrew, concerns Lauren justified by saying she didn't have time to find someone else and get them up to date on Suzanne's case. Finally, after Andrew noticed that Suzanne's platelet count had dropped almost to zero, they did a bone marrow biopsy. That showed hemophagocytosis, a result of macrophage activation syndrome, a known complication of Still's disease, which she had prior to the appendectomy without knowing it. They have her high-dose steroids, which caused her to feel better almost immediately and said she'd be referred to a rheumatologist to manage her condition. ("A Diagnosis")

After Richard started exhibiting symptoms during his presentation at the Surgical Innovation Conference, a worried Andrew contacted Lauren to ask for her help. She was out of the country and couldn't come to Seattle to help out but she did send Andrew a list of possible diagnoses. ("Sing It Again")

She is an only child, despite claiming to Suzanne Britland and Hadley that she has three sisters.

She is an internist and diagnostician from the University of California San Francisco. 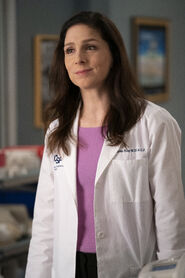 Retrieved from "https://greysanatomy.fandom.com/wiki/Lauren_Riley?oldid=308756"
Community content is available under CC-BY-SA unless otherwise noted.