If Only You Were Lonely

Lawrence Jennings was chairman of the board of directors of Seattle Grace Hospital, later Seattle Grace Mercy West Hospital. He was once admitted to the hospital when a fish from the Amazon had traveled up his penis.

Larry was on vacation in the Amazon when he cut his vacation short to come home. At the hospital, all the Chief candidates tried to suck up to him. He said that he'd vote for whichever of them fixed his problem and showed them his severely swollen testicles. He hadn't urinated in three days. They called urology to put in a supra-pubic catheter to drain his bladder and got an ultrasound and x-ray to determine the cause.

The x-ray showed what looked like a skeleton in his penis. Webber came in and said it was a candiru fish, which is known for swimming up streams of urine and lodging itself in the urethra. He was taken into surgery where the fish was removed and the damage to his bladder was repaired. During his surgery, he had a heart issue, so Burke monitored his heart while they operated. The surgery was successful and he was stable and awake afterward. ("Desire")

Derek's Offer to be ChiefEdit

Larry went to Derek and said the board was meeting soon. He said he needed to know if Derek wanted to be Chief. Later, when he saw Callie Torres yelling at Richard on the catwalk, he made a disparaging comment about Richard's control of the hospital. ("Good Mourning")

Larry and the rest of the board started having secret meetings, drawing suspicion from the doctors in the hospital. Not longer after that, the announcement was made that Seattle Grace Hospital and Mercy West Medical Center would be merging. ("Goodbye")

After Cathy Becker died under suspicious circumstances, Larry, Richard Webber, and a lawyer interviewed all the doctors who had worked in the ER that evening, trying to piece together exactly what went wrong. ("I Saw What I Saw")

When the Andersons pledged a $25 million donation to the hospital, Jennings and Webber pressured Arizona Robbins into doing a surgery on Wallace Anderson that she didn't believe he was strong enough to survive. When Wallace later died, Jennings tried to suck up to the Andersons, but he was informed that Arizona was the reason they'd still be donating the money, not him. ("Invest in Love")

When Richard started drinking again, Meredith Grey eventually let Derek go to the board and Larry, along with a few others, confronted him about his alcohol abuse. ("I Like You So Much Better When You're Naked")

Richard was presented with two options: either he could take early retirement and relinquish his medical license or he could go to rehab and get his job back when he was done, pending board approval. He said he needed time to think. He ultimately decided to go to rehab. ("State of Love and Trust")

Larry was called in when Derek's Alzheimer's trial was compromised. He told Derek that Richard had confessed to tampering with the trial, letting Meredith off the hook. ("She's Gone")

When Richard stepped down and Owen was promoted to Chief of Surgery, Larry sent Owen a bottle of scotch to congratulate him. ("Take the Lead")

Teddy gave a presentation to the board, including Jennings, to try to get funding for her stem cell research. The presentation didn't go well, but Teddy got her funding when Owen put a good word in for her. ("If Only You Were Lonely")

Larry married a woman named Nancy but five years before his hospitalization, he began to have an affair with his assistant, Celeste Newman. His assistant claimed that it was true love and their love was very rare and it was a bonus that they could work and play together although it bothered her that he hadn't left his wife, even after five years. His wife later showed up at the hospital and revealed she always knew about the affair. Larry's assistant quit and left Larry. His wife did the same. ("Desire")

Larry was a good friend of Richard Webber. He was the one who appointed Richard Chief of Surgery. He was upset when Richard decided to step down. ("Desire")

Dr. Jennings was the Board Chairman of Seattle Grace Hospital and later Seattle Grace Mercy West Hospital. He was fired along with the rest of the board when the hospital was sold to the plane crash survivors and renamed. 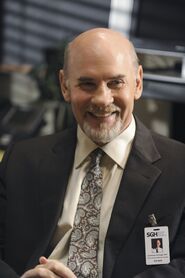 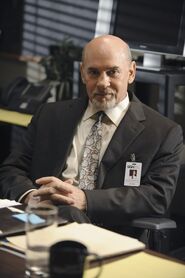 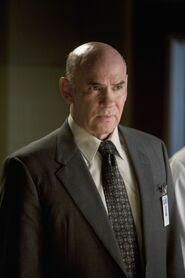 Retrieved from "https://greysanatomy.fandom.com/wiki/Lawrence_Jennings?oldid=269881"
Community content is available under CC-BY-SA unless otherwise noted.