Lena McCallister is the attorney who defended Alex in court.

When the day of Alex's plea hearing came, Lena appeared in court with him. She told him that all he had to do that day was enter a plea for misdemeanor assault. They were both shocked when the prosecution instead charged him with felony assault in the second degree. She tried to get the charge changed, but the judge said it wasn't a trial and he just needed to enter a plea. Alex decided to plead not guilty.

She is a defense attorney in Seattle. 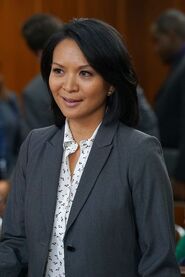 Retrieved from "https://greysanatomy.fandom.com/wiki/Lena_McCallister?oldid=239519"
Community content is available under CC-BY-SA unless otherwise noted.