From a Whisper to a Scream

Louise O'Malley is the mother of George O'Malley.

When the teachers went on strike in 2003, Louise walked the line for 48 days. ("Break on Through")

When Harold fell and broke his clavicle, she was on a trip to DC with a class. ("Staring at the Sun")

When Harold was diagnosed with cancer, Louise came to his bedside. Together, they decided that despite George wanting Erica to do his surgery that they would have Burke operate on Harold's heart to replace his valve. ("Staring at the Sun")

Before Harold's cancer surgery, Louise invited the extended family to the hospital for a party, figuring Harold wouldn't be up for visitors afterward. After his surgery, she sat by his bedside along with her sons. ("Six Days, Part 1")

When Harold's organs started shutting down, his family was informed that he would not be able to wake up and they were given the choice to let nature take its course or turn off life support. They chose to turn off life support and stayed with him while he died. ("Six Days, Part 2")

Louise came to the hospital to visit and found Callie. She hadn't been told that Callie and George were getting divorced and she had made baby clothes. When Izzie told her that they weren't together anymore, she was upset. She confronted George and tried to get him to work things out with Callie, but he said it was too late for them. ("Lay Your Hands on Me")

After George was declared brain dead, she asked Callie to decide what to do with his organs as in God's eyes she was still George's wife and because she has too much to do including having to tell Ronny and Jerry, who were on a fishing trip and unreachable. Callie accepted, but passed the duty onto Izzie, whom she felt was the person closest to George. Louise sobbed at George's funeral as he was laid to rest. She later came to Owen, looking for an explanation as to why George had joined the Army. Owen explained how he had tremendous potential as a trauma surgeon. And he wanted to get better faster and save more people. ("Good Mourning")

Louise was admitted into Seattle Grace Mercy West after she had her gallbladder removed at another hospital. Bailey assigned Meredith to take special care of her due to the O'Malley history of dying at Seattle Grace. Her surgery was successful. ("Heart-Shaped Box")

Callie was surprised to see Louise at the hospital. She initially introduced Arizona as Dr. Robbins. Louise noticed her ring and asked Meredith, who just told her that Callie was re-married and she was happy. Callie waited by Louise's bedside after her surgery. When she woke up, Callie told her that Arizona was her wife and they had a baby. Louise was excited about that and asked to see pictures of Sofia. ("Heart-Shaped Box")

Louise was married to her husband, Harold, for 40 years before his death.

Louise and Harold had three children: Ronny, Jerry, and George.

Louise is a teacher. She went on strike with the teachers' union in 2003. ("Break on Through")

When her husband was admitted to Seattle Grace Hospital after collapsing and fracturing his clavicle, she was unable to be with him immediately because she was on a field trip to Washington with her class. 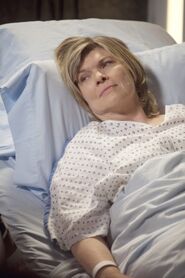 Retrieved from "https://greysanatomy.fandom.com/wiki/Louise_O%27Malley?oldid=269879"
Community content is available under CC-BY-SA unless otherwise noted.