Lucy Fields is an OB/GYN attending and maternal-fetal medicine fellow who tended to Callie's pregnancy with Sofia and who later had a brief romantic liaison with Alex Karev. She left Seattle to take a job at the Namboze Clinic in Malawi.

She attended Harvard Medical School, completed her OB/GYN residency at Duke, and did a fellowship in maternal-fetal medicine at Seattle Grace Mercy West Hospital.

When Callie Torres became pregnant, Arizona selected Lucy to monitor her pregnancy. She did an ultrasound and showed Callie, Arizona, and Mark the yolk sac. Callie was concerned because she was bleeding, but Lucy assured her that that's common. She agreed to run some tests, but told Callie just to live her life. However, Callie refused to leave the exam room until Lucy ruled out everything. Lucy ended up bringing up a stronger ultrasound machine, which allowed the three parents to hear the heartbeat. ("Don't Deceive Me (Please Don't Go)")

She did a second ultrasound on Callie later and asked if they'd scheduled an amniocentesis, which prompted a debate between the three parents over whether or not they needed one. ("Not Responsible")

Lucy did a third ultrasound at 23.5 weeks. She said everything looked good, but Callie's blood pressure was just a little high, though she said it was due to the nerves about her baby shower. She then invited Lucy to the baby shower. ("This is How We Do It")

When Alex came to the NICU looking for a brain dead infant whom the transplant coordinator had suggested as a potential donor for his patient, who had hypoplastic left-heart syndrome, he butted head with Lucy, who banned him from the NICU over his comments. She later saw him talking to his patient's parents in the NICU and wanted to go kick him out, but Arizona told her that Alex is a good guy and a good doctor, even if he can be an ass sometimes. ("P.Y.T. (Pretty Young Thing)")

When Lucy found out that Alex needed to sign his delinquent charts to get out of the hospital in time for a basketball game, she helped him get through the charts because she didn't want him to miss the game. After they were finished, he asked her to go to the game with him, but she declined. She later watched from the gallery as he skipped the game to treat a four year old. ("Golden Hour")

When Meredith's vision started to become blurry due to her fertility medications, Alex came and talked to Lucy about it. She correctly figured out that he was just looking for an excuse to talk to her, because if Meredith were really concerned, she'd come to Lucy herself. When Meredith's condition worsened, she did come to Lucy, who examined her and told her to stop taking the drugs immediately and got a consult from an ophthalmologist. ("Not Responsible")

Lucy came to Callie's baby shower, where she noticed that Alex was stealing party food and asked him about it. Later, she asked Meredith about Alex and she told Lucy about some of the things Alex had been through, saying the neanderthal act was just a front. ("This is How We Do It")

When Callie and Arizona were a car accident when Callie was 23.5 weeks pregnant, Lucy was called in to monitor the pregnancy as they worked on Callie. She was able to find a fetal heartbeat in the ER, but when she admitted that she was out of her depth, they called in Addison Forbes Montgomery. Lucy was embarrassed at having been benched. ("Song Beneath the Song")

Lucy was supposed to go to Callie and Arizona's wedding as Alex's date, but a baby she was delivering got stuck and so she couldn't make it. ("White Wedding")

She got a job over 50 other applicants at Baylor in Texas. She was hesitant to take it, thinking about spending another year in Seattle. She mentioned there were a lot of factors to consider before taking the job, implicitly saying her relationship with Alex was one of the reasons. In surgery, Arizona mentioned to Alex that a doctor was needed to take over for her at the Namboze Clinic, and that he was qualified to do it. Lucy overheard the offer and got interested. Upon hearing Alex was interested too, she found out that she wasn't a factor that he took into consideration. After a talk with Arizona, Alex realized that he loved Lucy and that she was an important factor. By that time, Lucy had already taken the job at Namboze, stating career comes first. ("I Will Survive")

Lucy was part of the team of doctors to tend to victims of a plane crash. However, all but one died in the crash, so she delivered the news of their deaths to several victims' families. At the end of the day, she went to look for Alex at Joe's bar and asked him to tell her not to go to Africa. Feeling bad over getting Meredith fired, he was drinking and simply told her to go to hell. ("Unaccompanied Minor")

When Cristina realized she hadn't had a period in a while, she went to Lucy, who did an ultrasound and said it looked like she was about six weeks pregnant. She asked if Cristina wanted to talk about options, but Cristina said she didn't. ("Unaccompanied Minor")

Later, Alex noticed Dr. Fields, Teddy, Arizona, and Cristina talking to the parents so he walked in and tried to join. Afterward, he asked Arizona why he wasn't brought in earlier and Lucy told him he was off the case because of the "turnip" comment. Alex and Lucy watched the heart transplant from the gallery. He explained that he was sorry for what he said, but felt he deserved to be in the surgery. Lucy watched Alex standing over the heart transplant baby and smiling with the baby's parents. Arizona told Lucy she could teach Alex not to be an ass, but she didn't have to teach him to care.

At the end of the night, Alex and Lucy were in the elevator together, not speaking. Alex finally told her he was sorry about her patient. She said she was happy for his. As they walked out, he started to ask if she wanted "to get a --," but she cut him off and said no. ("P.Y.T. (Pretty Young Thing)")

When she heard about that Alex had charts to finish before he could go to a basketball game, she sat down to help him because she agreed he couldn't miss the game. In the end, she talked him into asking her and then claimed it was all just so she could see if he'd ask her to the game. ("Golden Hour")

When he came to her to get help with Meredith's vision, she correctly figured out that he was just trying to get a second chance with her, but couldn't just ask her out again after being rejected. He then asked her out, but was rejected a second time. ("Not Responsible")

They talked again at Callie and Arizona's baby shower, where she noticed him stealing food. She asked Meredith about him and she said there's more to Alex than it seems and told Lucy about what he'd been through. At the end of the night, she joined him in his trailer in the parking lot for a drink. She figured out that he had been waiting for her. Alex tried to defend himself, but she kissed him. ("This is How We Do It")

She was supposed to go to Callie and Arizona's wedding with Alex, but she got stuck delivering a baby. ("White Wedding")

Their relationship ended when, believing Alex didn't consider her a factor in his decision of whether or not to take the job at Namboze, Lucy stepped in and took the job herself. ("I Will Survive")

While at Seattle Grace Mercy West, Lucy did the initial exam and ultrasound for Callie when she was pregnant with Sofia. Although the case was relatively boring for a maternal-fetal fellow, Arizona convinced Lucy to be Callie's OB. Lucy was also the go-to OB consult for emergent patients.

Near the end of her fellowship, Lucy applied for and was accepted into a program at Baylor in Texas. She considered staying another year at Seattle Grace Mercy West, but ultimately chose to work at Namboze Clinic as its director, taking over Arizona's old position. ("I Will Survive") 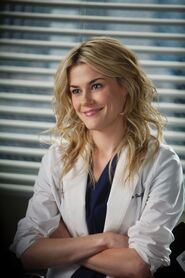 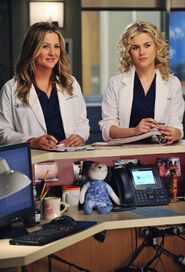 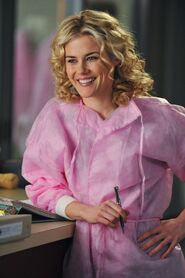 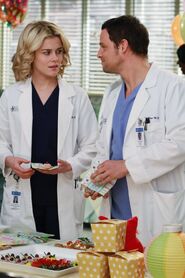 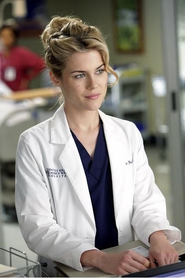 Retrieved from "https://greysanatomy.fandom.com/wiki/Lucy_Fields?oldid=269909"
Community content is available under CC-BY-SA unless otherwise noted.