Fight For Your Mind

Marie Cerone is the holder of the patent Meredith needed for her research and an old family friend.

Marie came to Seattle to meet with Meredith when Meredith asked for use of her polymer in research. When she arrived, she and Meredith realized they knew each other when Meredith was a child because Marie and Ellis were best friends. They caught up on the lost time and then Meredith made her proposal. Marie was still unconvinced and so Meredith had Taryn bring out the mouse they had saved by secretly using Marie's polymer. Marie agreed that it was revolutionary and said after she had a good night's sleep, they'd meet and talk business. However, Meredith learned shortly afterward from Richard that Marie and Ellis had had a falling out, which is why they didn't remain friends and that Marie had likely stolen Meredith's idea. ("Games People Play")

When Meredith asked her about it, Marie said that Ellis had stolen the idea for the surgical innovation that won her her second Harper Avery. They had developed it together, but Ellis published the research solo before Marie could publish it jointly. In exchange, Marie wanted Meredith to announce Marie's contribution publicly and change the name of the procedure to the Grey/Cerone Method. Meredith told her she couldn't undo her mother's legacy without being able to hear her side of it. Marie then decided she would use her company's resources to fully develop the mini-livers before Meredith could do so and have them known as Cerones. ("Old Scars, Future Hearts")

When Meredith gave a presentation of her mini-livers, Marie attended. During the presentation, Meredith informed everyone about Marie's contribution to Ellis' surgical method and announced that she wanted the method to be now known as the Grey-Cerone Method. After the presentation, Marie tried to talk to Meredith, but Meredith said she'd said everything she wanted to say. ("Fight For Your Mind")

Meredith reached out to Marie in Spain to inquire if she could help her out on her quest to find Rhnull blood for Gus Carter, but to no avail. ("Head Over High Heels")

She went back to Spain after time in the US because her father wanted her to run his company. Later, she took over ownership when her father died.

She and Ellis Grey were best friends for many years when Meredith was a child until they had a falling out.

She is an attending general surgeon.

When she and Ellis Grey worked together, she was sexually harassed by Harper Avery and was eventually paid a settlement as a result of that. Ellis Grey left her name off the paper publishing their work in order to win a Harper Avery Award, which Marie was ineligible to win, ending their friendship and resulting in Marie returning to Spain to run her father’s company. At a presentation she was giving on her mini-livers, Meredith Grey announced that the Grey Method would be known as the Grey-Cerone Method to acknowledge Marie's contributions. 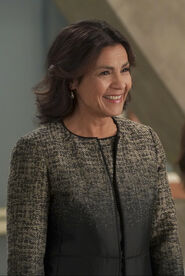 Retrieved from "https://greysanatomy.fandom.com/wiki/Marie_Cerone?oldid=316732"
Community content is available under CC-BY-SA unless otherwise noted.