Maya Roberts is a young cancer patient who had a new set of ribs 3D printed for her treatment.

When Maya was about 13, she had a pain in her leg. It was diagnosed as chondrosarcoma, a type of bone cancer only treatable with surgery. Her right leg was amputated below the knee. Two years later, the cancer came back in her chest. She went to three different hospitals looking for a miracle and each of them told her to go to Grey Sloan Memorial Hospital, to Alex Karev. When she did so, Alex saw her and then consulted with Callie Torres and Maggie Pierce, who told him that titanium plates to replace the ribs and sternum they'd have to remove was the tried and true method to treat the cancer.

Alex took the plan to Maya, who rejected it after hearing she'd have to have annual revision surgeries and the titanium plates were fragile, leaving her vulnerable to injury. When Alex refused to explore other, more radical options, she fired him from her case.

After firing Alex, she went to Callie and Maggie directly, asking them for other choices. They determined that they could remove her cancer and then replace her ribs and sternum with a 3D printed version made specifically for her body. Maya accepted the plan despite the risks. Her mother was initially worried, but signed the consent when Maya asked her to.

Before her surgery, Alex came to hold her hand. Once in the OR, she started to get worried and told Alex she didn't want to die. He told her she wouldn't, but she made him promise to tell her mom there was an envelope under her bed with bank statements and the deed to their house and to keep her mother company while she was in surgery if he could.

As they went to place the new ribs, they found that it didn't quite fit, despite being custom-made. In order to finish the procedure, they decided to pull on Maya's ribs to separate them and give them the room they needed to place the new ribs. It was successful and Maya was stable and awake after her surgery.

Maya was raised by a single mother who was young when she was born. Maya took charge in her own medical care because her mother never really understood anything about it and said Maya had a mind for it. 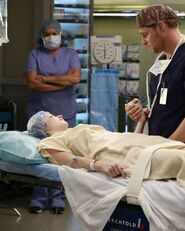 Retrieved from "https://greysanatomy.fandom.com/wiki/Maya_Roberts?oldid=258017"
Community content is available under CC-BY-SA unless otherwise noted.