Maya and Carina get married at Kaminski's

Maya and Carina's Wedding is the wedding between Maya Bishop and Carina DeLuca.

During the COVID-19 Pandemic, Carina was faced with her H-1B visa expiring with no option to renew it as Immigration had been shut down due to the pandemic. With no other options, Carina planned to return to Italy until Immigration re-opened and could process her visa renewal, allowing her to return to Seattle. Not wanting to live apart from Carina, Maya told Carina she'd go to Italy with her. ("Save Yourself")

However, after taking some time to consider the impact her leaving would have on her team, Maya reluctantly told Carina she'd have to stay in Seattle, which Carina said she understood. ("Here It Comes Again")

When the day of Carina's departure arrived, both she and Maya struggled with her leaving. When Maya asked about how she let her visa expire, Carina told her the visa process was complicated and felt Maya never listened when she tried to explain it to her. The conversation led Maya to realize she'd never asked Carina how she felt about having to go back to Italy. She just assumed Carina would be happy to go home for a while. Carina explained that Italy hadn't felt like her home since her mother left when she was sixteen. She didn't find her home until she met Maya and said Maya was her home. She was being forced to leave her home during a pandemic and Maya realized she'd been trying to act like it wasn't a big deal so Maya wouldn't freak out.

During a second conversation, they ended up fighting because Maya confronted Carina over her declaration that she never wanted to get married. She said if they got married, Carina could stay in the US. Carina said she didn't want to get married just for the visa and further said that for her, moving into the apartment was marriage. Maya made a comment about Carina having Gabriella in Italy, leaving Carina to leave in anger, saying she didn't want Maya to drive her to the airport anymore.

While Maya went to East Bay Surgical Center to talk to Andy about what happened, Carina called Gabriella on her way to the airport. Gabriella told Carina that she'd never seen Carina as happy as she was with Maya, even while she was grieving. She told Carina not to let herself lose Maya for a problem that's fixable. She also told Carina to celebrate the fact that Maya's country would even allow them to get married, unlike Italy.

Maya told Andy what had happened and said she didn't know if she and Carina would ever get back together, even if Carina returned to the US. While they were talking, Carina came up behind Maya and said she was a stubborn idiot and still though marriage was a way to keep women as property, but she'd rather do it than lose Maya. Maya said she was still not sure if she wanted children, but Carina said they could figure that out later and asked Maya to marry her. Maya accepted. ("Comfortably Numb")

Two days later, Maya put Carina on a plane back to Italy, where she would work for four weeks while waiting for her fiancée visa to be approved so she could return. When her team asked about a wedding, Maya told them Carina barely agreed to a marriage, so she didn't think a wedding was in the cards. However, Dean later came to Maya and said the team needed something to celebrate and asked her to have a wedding for them. ("Say Her Name")

Six weeks later, after Carina had returned and quarantined for two weeks, the day of the wedding arrived. Vic, wanting to help her parents, organized the wedding to take place at the newly-reopened Kaminski's. Since everyone present was in their pod and got tested every three days and they were testing people day of, they made the event mask-free. Carina asked if she was sure she didn't want to invite her parents. Maya said she didn't even know where her brother was and inviting her mother would be difficult. However, she later had Andy take her to her parents' house, where she formally came out to them for the first time and told her mother that Carina had offered to take Katherine in should she decide she's had enough of Lane.

Once all the guests had arrived, including Katherine, who came alone, the ceremony started. When Ben mentioned that they had written their own vows, Maya started to panic as she'd forgotten and hadn't written anything. Carina said it was okay, that she actually loved that "Queen of the Clipboard" Maya Bishop had gotten so excited about something that she forgot. She told Carina that she loved her and chose her every day. Carina said she didn't have anything to add to that, so Ben performed the ceremony and pronounced them wife and wife.

With that done, the guests started dancing. The dancing and celebrating continued until the firefighters present from station 19 got the message that Maya had been relieved of her duties. While the others watched on in horror, Maya continued dancing with Carina, unaware of what had happened. ("Forever and Ever, Amen") 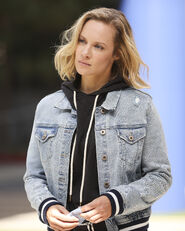 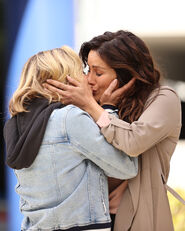 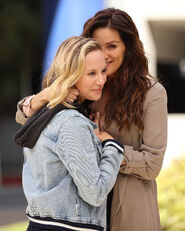 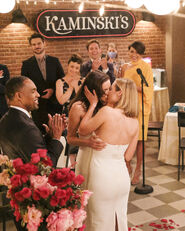 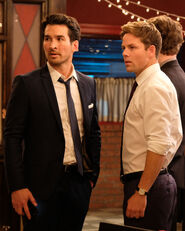 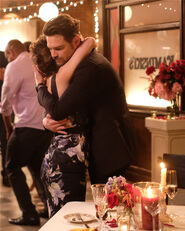 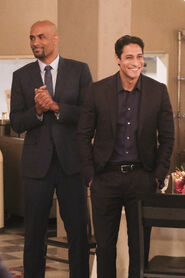