Start a Wiki
watch 02:39
'Grey's Anatomy' Profile: Megan Hunt
Do you like this video?

The Room Where It Happens

Megan Hunt is Owen Hunt's younger sister who was missing for ten years. She served in the U.S. Army as a trauma surgeon at the same time as her brother, Teddy Altman, and Nathan Riggs. She is currently engaged to Nathan with whom she's raising her son Farouk Shami.

Megan is three years younger than her brother Owen and grew up in Seattle with her family. The siblings attended medical school together, where they met Nathan Riggs, with whom she became romantically involved.

The circumstances of the day of Megan's disappearance are somewhat unclear. She boarded a helicopter, which, while flying through unprotected airspace in the battlefield, went missing, having disappeared without a trace along with her. The events leading to her boarding the chopper, however, are not clear, as both Nathan and Owen have their own versions of the story.

Originally, Nathan told Meredith that he had been working in a field unit with Megan on that day. According to him, they needed to transport a patient, but the chopper only had room for one of them. Megan wanted to go, as the patient was hers, so after failing to talk her out of it, Nathan agreed to let her on board. The chopper, however, never made it. Nathan also pointed out that after Megan's disappearance, he would've continued to look for her, but Owen wanted to give up searching and made him stop.

Upon hearing Nathan's story from Meredith, Owen laughed joylessly, claiming that Nathan never said anything to Megan about not getting on board and, in fact, wasn't even anywhere near the chopper on that day, but with another woman. According to him, Megan had called him earlier that day, telling him that Nathan had been repeatedly cheating on her and that she was getting on the chopper to get away from him. ("I Wear the Face")

Nathan later admitted to Maggie that, although he had told mostly the truth, he did cheat on her and they did fight. He said that he didn't tell Meredith about the fighting and cheating because he believed some things were meant for just him and Megan, and that he didn't owe anyone that explanation. ("It's Alright, Ma (I'm Only Bleeding)")

Owen later admitted to Amelia that when he learned that Nathan had cheated on Megan, he had told her to get on the helicopter. It was the last thing he ever said to her. ("Trigger Happy")

Ten years after she went missing, she was found in the basement of a house in a rebel-held neighborhood, where she'd been left after a raid. After a hospital stay in Germany, she was sent to Seattle. ("True Colors")

Since a fire made the helipad at Grey Sloan Memorial Hospital unavailable the day of her arrival, Owen and Amelia drove to Madigan Army Medical Center to meet the helicopter she was in. They were warned that she might communicate in extremes or possibly not at all. When Nathan learned that she was alive, he also left to go to Madigan. ("Ring of Fire")

Once she was at the hospital, Megan revealed that despite being held captive, she was treated well. They only threw her in the basement to protect her from a bombing and wasn't actually kept in there. The only complaint she had was that she had a massive abdominal wound from a bombing that hadn't closed, which left her with a frozen abdomen. She was desperate to get back to her son, Farouk, a Syrian refugee she'd been caring for since he was four, so she wanted to get her abdomen repaired as quickly as possible so she could return to Iraq to be with him. Meredith suggested an extreme surgery that would close her abdomen much sooner than the more conservative approach and Megan jumped at the more radical option. After using saline implants to stretch her skin, Meredith attempted surgery to close her repaired abdomen, but found that she didn't have enough skin to close. ("Break Down the House")

Meredith was forced to come up with an alternative plan to close her abdomen. After considering her options, she decided to look for a donor to give Megan an abdominal wall transplant. She challenged the sub-interns to find her a suitable donor. After reviewing several candidates they proposed, she finally found a good donor. Megan agreed to the transplant and it went well. ("Get Off on the Pain")

A week after surgery, she had sensation in her new skin and was healing well. ("Go Big or Go Home")

To her dismay, she developed an infection in her abdomen which required IV antibiotics. When she learned that Farouk was in the hospital, she tried to leave so she could go back to him, but Meredith stopped her and convinced her to stay, reminding her that she couldn't be there for Farouk if she died. Unbeknownst to her, Farouk was only in the hospital as a cover Nathan was using to get him a medical visa to come to the US. She was happy to be reunited with Farouk. ("Ain't That a Kick in the Head")

After being released from the hospital, Megan decided to move to Los Angeles with Farouk and Nathan, because when she was in Iraq, she consoled herself with remembering a childhood trip to the beach and the only part of the trip she couldn't fake was the ocean, which made her determined to visit the ocean every day once she was rescued. She sent Farouk and Nathan ahead to get the house ready and then took a road trip to join them. Owen unexpectedly joined her on the trip, which gave them time to hash out their old issues. Once she arrived in Los Angeles, she walked out onto the beach and into the water. Nathan and Farouk quickly joined her and they played in the water together happily. ("Danger Zone")

Caleb Hicks was a patient of Megan's in San Diego. He had lost a leg, penis, and scrotum in an IED explosion and also had a frozen abdomen like she had. She convinced him to go for the abdominal wall transplant by showing him her own result. He was then brought to Grey Sloan Memorial Hospital to have that transplant as well as a penis and scrotum. After being briefly cancelled, the surgery was rescheduled and went forward as planned. ("The Whole Package")

Megan and Nathan were in a romantic relationship, and Megan apparently loved him dearly. However, according to Owen, Nathan had been cheating on her, prompting her to get on the chopper along with which she disappeared. ("I Wear the Face")

During their time together, she and Nathan talked about having kids. ("Both Sides Now")

After she was rescued, Nathan proposed to Megan, but she turned him down because she believed he was still in love with Meredith. ("Get Off on the Pain")

However, she later accepted the proposal and they moved to Los Angeles together with Farouk. ("Danger Zone")

Megan said that she and Nathan visit a couple's therapist weekly. ("The Whole Package")

While she missing, Owen did not talk about Megan to his friends and co-workers. After some of them found out about her existence, he revealed that they were very close and she used to follow Owen and do everything he did. He described her as being smarter, funnier, and a better person than him.

After returning to Seattle and meeting Amelia, Megan talked with Teddy and Evelyn and they all agreed that Owen and Amelia's marriage was not a good one. ("Get Off on the Pain")

While she was being held captive in Iraq, she took custody of a child named Farouk, a Syrian refugee whose parents had died in combat. Because she hadn't legally adopted him, she wasn't able to bring him to the United States with her. She'd been taking care of him for six years at the time of her rescue.

Megan graduated from Harvard Medical School. She later joined the US Army as a staff surgeon.

She currently works as a trauma surgeon in Los Angeles, possibly with a focus on veterans. She holds privileges at Grey Sloan Memorial Hospital, which she obtained when participating on an abdominal wall and penis and scrotum transplant. 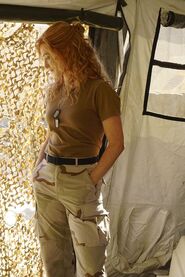 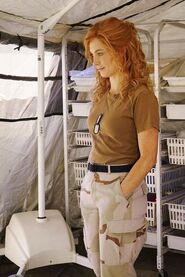 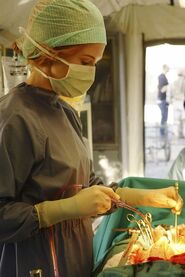 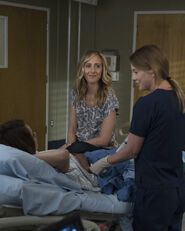 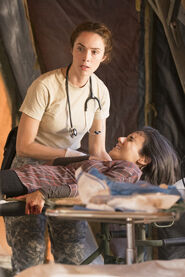 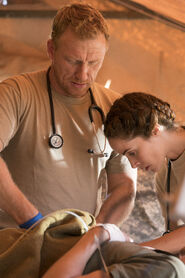 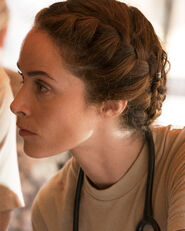 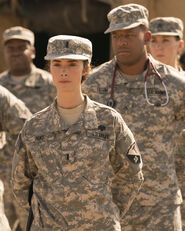 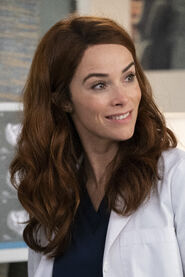 Retrieved from "https://greysanatomy.fandom.com/wiki/Megan_Hunt?oldid=279507"
Community content is available under CC-BY-SA unless otherwise noted.