Diane Farr
Miranda is a woman with breast cancer whom Sheldon met at radiation.

Miranda was at the hospital trying to get a snack out of a vending machine when it got stuck. Sheldon came up and helped her by using his money to buy a snack, saying he was having a bad night and the best way to cheer up is to cheer someone else up.

She and Sheldon later met again when they both had radiation. She told him she had breast cancer as they waited. They didn't initially recognize each other, but at their second session together, she put together that he was the same man. She apologized for being rude when they first met in radiation, saying she'd gotten close to other cancer patients before and it hurt when they died. Because of this, she told Sheldon they could chitchat in the office, but it couldn't go beyond that. They talked during their treatment each morning. During one session, Miranda told Sheldon her cancer had metastasized to her brain and the radiation was just to buy her enough time to go to her niece's college graduation. One morning, she told him she was thinking of trying a new place down the street for lunch. Instead of accepting the unspoken offer, he told her to let him know how it was.

One morning when Sheldon went in, Miranda wasn't there. He believed it was because she had died. However, at his next session, he sat in the chair she normally occupied and she came out of the treatment room, saying somethings about car trouble. He was happy to see her and kissed her. He then said he wanted to see her outside the office. She reminded him that she was dying, but he said she wasn't dying today and they kissed again. ("I'm Fine")

The first of Sheldon's friends Miranda met was Violet when they went to lunch together. Rather than saying that they met at radiation, Sheldon shared only the vending machine story. Miranda said she felt bad for lying to Violet about the cancer, saying Sheldon needed to talk to someone about the cancer and Miranda. He said he wasn't ready to think about her being gone. She told him to let his friends in. ("Full Release")

Miranda attended Jake and Addison's wedding at Sheldon's date. At the wedding, she met more of Sheldon's friends. ("In Which We Say Goodbye")

When Miranda visited Sheldon at the practice, she fell to the ground and started seizing. They rushed her to the ER, where Sheldon was faced with the reality that Miranda was really dying. When she woke up after her seizure, she'd been admitted to the hospital and Amelia wanted to keep her for observation. She agreed to stay for only one night. After that night, she decided to leave against medical advice. Sheldon tried to get her to stay, saying he'd be there with her every day, but she said no matter what the doctors did, she was going to die. She had a long, painful decline ahead of her. He offered to take her home and take care of her, but she said she didn't want that. She didn't want him with her during the bad part. She told him to walk away. He later came back and said that he wouldn't and he wanted to spend her last days with her. He quit his job and they sat on a beach together. ("In Which We Say Goodbye")

Her ex-husband asked her for a divorce in an email. She said she didn't miss him, but she missed sleeping next to him. He had a bad back and they slept back to back, which was nice. ("I'm Fine")

Sheldon bonded with Miranda as they got radiation together. After several weeks of polite chitchat, Sheldon told Miranda he wanted to see her outside the office because she lit up the room and he wanted that light in every room. ("I'm Fine")

When she started to decline rapidly and knew the end was near, she tried to break up with Sheldon, saying she didn't want him to watch her lose her faculties and then die. Sheldon later decided to quit his job and went to Miranda, saying she didn't get to push him away. He said he wasn't leaving and he was happy to take care of her however he could. He'd cherish her last days and surround her with love. She said she was wrong and they decided to go be on a beach together. ("In Which We Say Goodbye")

She has a niece whose college graduation she promised to attend. ("I'm Fine")

She had a friend she met in chemo who died, which made her reluctant to bond with other cancer patients. ("I'm Fine")

She plays and teaches violin. She loves the moment when everything clicks in her students' brains and it goes from noise to music. ("I'm Fine") 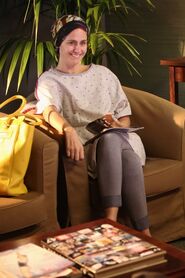 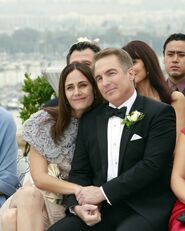 Retrieved from "https://greysanatomy.fandom.com/wiki/Miranda_(Season_6)?oldid=270245"
Community content is available under CC-BY-SA unless otherwise noted.