Embeth Davidtz
Nancy Shepherd is the sister of Derek and Amelia Shepherd. She lives in Connecticut and is a doctor of obstetrics and gynecology.

When Carolyn Shepherd broke her wrist before Thanksgiving, Derek invited the family to his and Addison's home for Thanksgiving dinner. Addison cooked, but Nancy ended up getting salmonella poisoning from the meal. ("Ex-Life")

When Meredith was annoyed that Derek hadn't responded to her telling him she'd broke things off with Finn, she went to Derek's trailer and found him fresh from the shower with a woman on his bed. Meredith assumed Derek was cheating on her, but it was just his sister, Nancy. Meredith left before Derek could explain.

She continued to hint to Derek to forgive Addison for her one-night stand with Mark. Eventually, Derek broke and told her that they carried on with their relationship for two months after he left. She then accepted this and went home happily, accepting his decision. However, before she went she gave him some advice. Nancy advised him that maybe he needed a little time alone to sort things out, to commit to himself rather than run circles around all the women in his life and Derek subsequently told Meredith he needed a little time to himself and she agreed. ("Let the Angels Commit")

As an OB/GYN, Nancy was excited to hear that Addison had a patient with two uteruses. When Noelle went into labor in only one of her uteruses, Nancy observed Addison doing a c-section. ("Let the Angels Commit")

Meredith asked her intern Heather Brooks to call all four of Derek's sisters to ask them if they were wanting to donate a nerve to Derek. Heather said to Meredith that Nancy hung up on her and after she called a second time, Nancy hung up on her again. Heather then said that she didn't think that Nancy was interested in donating her nerve. ("Love Turns You Upside Down")

When Amelia was in New York for a surgery, she ran into Nancy at the hospital, where Nancy was covering for an OB/GYN who was on maternity leave. Nancy invited Amelia and Link, whom she thought was Amelia's husband, Owen, to dinner. Amelia tried to decline, saying they were leaving, but Nancy overheard them talking about being there another day at least and invited her to dinner again. Amelia begged Link to go with her and taught him all about Owen so he could play the role. When they arrived at Nancy's house, Amelia was surprised to see that Kathleen was also there. After a tense, but not overwhelming time, Carolyn arrived and Kathleen revealed that she had mentioned it to her. Carolyn, who had met Owen before when she visited Derek, exposed the lie and the dinner quickly ended. The next day, Amelia texted Nancy to see if she was at the hospital, but Nancy texted back and said she wasn't. ("Good Shepherd")

Nancy is married to someone named John, an investment banker, and has children, which form part of Derek's nine nieces and five nephews. She has slept with Mark Sloan "once or twice" and later commented that sleeping with him was like a rite of passage.

Nancy is fond of her ex-sister-in-law, Addison. When she found out that Derek and Addison were getting divorced, she tried to convince Derek not to go through with it.

Nancy is an OB/GYN. She covered the head of OB/GYN's maternity leave at the Catherine Fox Medical Center in Manhattan.

While Nancy was in Seattle visiting Derek, she admitted she left one of her pregnant patients in Connecticut, who was 35 weeks pregnant with twins, to see Derek and find out what was going on. Nancy also wanted to see a special case at the hospital while she was there. Addison had a pregnant patient (Noelle Lavatte) with uterus duplex bicollis (two uteruses) who later went into labor. Nancy scrubbed in and observed Addison and O'Malley deliver one of the two babies. 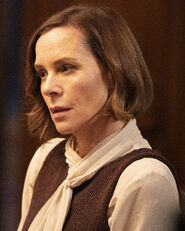