Start a Wiki
watch 02:30
'Grey's Anatomy' Profile: Nicole Herman
Do you like this video?

Nicole Herman was the Head of Fetal Surgery at Grey Sloan Memorial Hospital.

Dr. Nicole Herman was first seen when she talked to Arizona about a shared patient. She repaired the U.T.O. at 21 weeks and when she went to check on the baby, the parents could not stop singing the praises of Arizona, while she only did a few little stitches when the baby hit the air. Nicole brought up the open fellowship spot and suggested that Arizona should apply so that she could learn something that's actually hard, rather than taking the credit for other people's hard work. Arizona objected that she too did really hard things in peds, but Nicole wasn't convinced. ("I Must Have Lost It on the Wind")

When Arizona started her fellowship, Nicole immediately began assigning extra research and work to her. When she struggled to keep up, Nicole reminded her that everything in the womb happens at super-speed, so she needs to learn to keep up. ("Got to Be Real")

Nicole continued teaching Arizona and an OB/GYN resident, Dr. Graham Maddox, in a very strict and severe manner. She noted Arizona's impeccable record and good relationship with her peers, but treated her strictly as her fellow, for example not letting her join in on a personal conversation. She granted Arizona the chance to perform a solo fetal surgery, but upon noticing Arizona wasn't as well prepared as she expected her to be, she gave the opportunity to Graham. She later took Arizona aside and informed her that she was letting her down, causing her to start doubting Arizona's operating skills and even her own teaching skills. Herman told her that if she messed up again, she would fire her as her fellow as she did not have the time to wait for Arizona to catch up. ("Bend & Break")

Nicole told Arizona that she had an inoperable brain tumor and only had six months left to live. She wanted to use this period of time to teach Arizona about Fetal Surgery since it is a new field and all the knowledge she held wasn't found in any textbooks. ("Don't Let's Start")

After telling Arizona about the tumor, she left it up to Arizona to decide if she wanted to continue to learn from her or if she wanted to turn her into the board, which would mean that the fellowship would go away. While Arizona was trying to decide, Herman left her in charge of the department as she had an appointment. At the end of the day, Herman returned to the hospital. She noted that Arizona had done exactly what she should have done in Herman's absence and confessed that she'd been getting radiation therapy. After this, Arizona agreed that she wouldn't tell the rest of the board and would continue to learn from Herman. ("Could We Start Again, Please?")

When Amelia informed her that she believed she could remove the tumor, Herman initially rejected the idea, because she'd been given hope many times before and then had it taken away. However, after Arizona confronted her and said that she was throwing away a chance that April and Jackson would love to have for their baby, she relented and agreed to hear Amelia's plan. After hearing it, she agreed to have the surgery, but only after the tumor grew as large as it could get and still be removed in its entirety. She insisted on that even when Amelia insisted that it needed to be removed as soon as possible. ("Where Do We Go From Here")

While Amelia developed her surgical plan, Herman created an intense crash course intended to teach Arizona as much as possible in the time they had left. ("The Bed's Too Big Without You")

Herman and Arizona continued their crash course over the next four weeks. However, earlier than they expected, Herman started to experience fuzziness at the edges of her vision. An MRI revealed that the tumor had invaded her optic chiasm, meaning it was time for her surgery. She was taken immediately to the OR and sedated for surgery. ("Staring at the End")

Amelia operated and despite some complications, she successfully removed Nicole's tumor. However, she didn't wake up for several days after the surgery, leading Amelia to look for a cause. An MRI showed signs of a stroke and Amelia worried she'd never wake up. Despite this, she did eventually wake up. She was fully aware of her surroundings and showed no loss of mental faculties, but she was completely blind. She told Arizona that she was grateful that she got to figure out what was next for her because Arizona pushed so hard to get her to have the surgery. ("The Distance")

After being discharged from the hospital, Herman went to the Blind Institute, where she learned to live her daily life as a blind person. She sent Arizona a text that said, "Enjoying Blind Institute. Learning how to not bump into things. Not typing this obvi. Don't kill any babies." ("I Feel the Earth Move")

After finishing "Blind School," Nicole went dark over the loss of her ability to do surgery, to save lives. Then she looked at all the things Arizona was doing and realized she could teach and that could matter. She could save even more babies that way. ("Cold as Ice")

Nicole returned to Seattle when she had a series of headaches over a month. Amelia worried that her tumor had returned, even after a CT looked clear. However, she ordered a spinal tap to rule out CSF leak. After the tap instead confirmed it, Amelia said she'd need a shunt, but Amelia didn't want to do the surgery herself, because she had operated on Nicole before under the influence of a tumor. Nicole revealed that she knew about the tumor because of Tom Koracick and still wanted Amelia to do the surgery. ("Cold as Ice")

She was married but is now divorced. She mentions that while they were married, she was involved in many boards and committees, things that were important to him. She quit all that later because it wasn't important to her.

After becoming blind, she had sex with Tom. She said that sex when you're blind is even better. ("Cold as Ice")

She seems to have had a rather close professional relationship with Arizona Robbins, teasing her about the fact that fetal surgery is even harder than pediatric surgery.

However, when they began working together more closely, they bonded and became more friendly, with Arizona even spending several nights in the hospital with Herman, who was staying there during their crash course.

After Nicole left to go to what she called "Blind School," she lost contact with Arizona, though she continued to follow Arizona's professional work. They made up when Nicole returned to the hospital and offered to use her grant money to open a center for women's health with Arizona. ("Cold as Ice")

She and Amelia were shown discussing Dr. Addison Montgomery's new life as a mother, indicating they know each other both personally and professionally. Both practice the surgical specialty of maternal-fetal medicine and are renowned in fetal surgery.

While he was rounding on her service, she started a sexual relationship with Graham. She said he was a nominal surgeon and a complete tool, but was a satisfactory sexual partner.

Dr. Nicole Herman was the Head of Fetal Surgery at Grey Sloan Memorial Hospital. After an OB/GYN residency, she completed a maternal-fetal medicine fellowship and eventually sub-specialized in fetal surgery, a brand new field of medicine that she's basically inventing as she operates.

One of the few fetal surgeons in America, Nicole trained Dr. Arizona Robbins as her fetal fellow, and OB/GYN resident Dr. Graham Maddox who regularly rounded on her service. Her excellent reputation as a fetal surgeon made Grey Sloan Memorial Hospital the go-to hospital for fetal surgeries in the Pacific Northwest.

After she became blind following the surgery to remove her brain tumor, Nicole was left unable to operate and resigned.

After leaving surgery, she got a faculty position at UCSF, teaching fetal surgery. She got a grant from HHS and decided to use it to open a center for women's health along with Arizona, saying she could teach and Arizona could perform fetal surgery and make the country safer for women and babies. ("Cold as Ice") 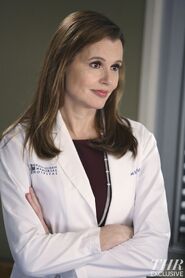 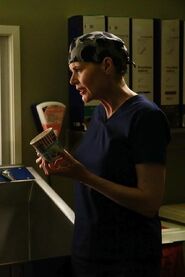 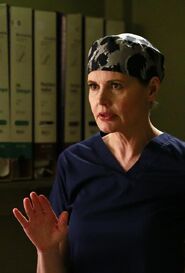 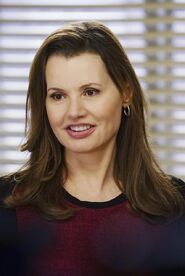 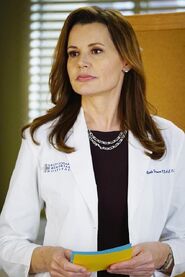 Retrieved from "https://greysanatomy.fandom.com/wiki/Nicole_Herman?oldid=294365"
Community content is available under CC-BY-SA unless otherwise noted.