Derek examines a patient with nails embedded in his head.

No Man's Land is the fourth episode of the first season and the 4th overall episode of Grey's Anatomy.

Cristina's encounter with Ellis Grey's former scrub nurse, who is now a patient at Seattle Grace, changes her forever. George becomes infuriated when he realizes that Izzie and Meredith treat him like their sister. An old part of Izzie's life will be revealed which makes her the subject of hospital gossip and Derek, Meredith, George and Alex have a patient with nails in his head.

Izzie, Meredith and George are getting ready for the day. Izzie is walking around in her underwear and George is mortified by her lack of personal boundaries. He continues to complain all the way to the hospital but Meredith and Izzie laugh him off. Derek wants to take Meredith out for breakfast and flirts with her, much to her annoyance.

One of Seattle Grace's veteran scrub nurses Elizabeth "Liz" Fallon is admitted and it causes a stir. Cristina is on Burke's service and is assigned to Liz, who mocks her about intentionally taking her chart only to impress Burke. Izzie's prostate cancer patient Mr. Humphrey refuses to allow her near him for his biopsy, causing her to be scolded by Bailey. George catches up with Izzie and Meredith to complain about this morning. Alex and Meredith get called to assist Derek in trauma.

Derek's patient Jorge Cruz injured himself falling down the stairs with a nail gun in his hand. Sixteen nails are embedded in his head and he is progressively getting worse. It is revealed that Liz is Ellis Grey's former scrub nurse and learns from Richard that Meredith is working at Seattle Grace. Izzie tries to go back to Mr. Humphrey but he adamantly insists that she get out. She realizes that he had seen a photoshoot that she did last year and was only just published. Jorge's wife Sona is forced to make a decision as the surgery to extract the nails is very risky and may be fatal. George helps out by researching on cases involving nail guns and discovers that there have been twenty three cases and one of them was a suicide. Mr. Humphrey's surgeon turns out to be Dr. Harry Victor, known as "Limp Harry" for his aggressive approach ("he never spares the nerves"). Dr. Victor intends to cut out the entire prostate, including the nerves, which would mean that Mr. Humphrey will no longer be able to have an erection.

George still won't let off about this morning. Izzie dismisses him by telling him to go buy her tampons during his grocery run later. Meredith visits her mother and is stricken that Ellis remembers Liz, her scrub nurse, but not her own daughter. Izzie and Meredith are furious that George didn't buy the tampons but he argues that "men don't buy tampons".

Cristina returns to take Liz's vitals. Liz asks Cristina if she has anyone (a loved one or a pet) waiting at home for her. Izzie enters the locker room and is horrified to find out that her past as a model has been discovered. Alex printed out large glossy prints of her photoshoots and taped it all over the locker room and on the doors. She confronts him and angrily tells him that he can continue mocking her with "Dr. Model" but she graduated from medical debt free unlike him and most of her peers.

Izzie goes back to Mr. Humphrey to call him out on his supposed chauvinism. He explains that it wasn't chauvinism but that he had been fantasizing about her since seeing the photo and didn't want her to see him "emasculated". Cristina confronts Burke about sending her to pointless tests on Liz. He finally tells her that she was terminal and had been admitted at Seattle Grace with the intention of dying here. Meredith visits with Liz and they reminisce about Ellis. Liz codes and dies later in the evening (she signed a DNR). Meredith learns that Jorge and Sona wanted to go through with surgery. She tries to dissuade Sona and asks her if five good years better than ten bad ones. Sona tells her she'd rather have more time with her husband even if it meant having to care for him. Derek pulls Meredith away and reminds her that this was their decision. Izzie advocates for Mr. Humphrey and tells Dr. Victor to not cut the nerves. Bailey backs her up.

Derek mentioned to Meredith that he was performing a cordotomy that day. His surgery was rescheduled when Jorge Cruz was brought into the hospital.

Liz, 55, was in the hospital after being diagnosed with pancreatic cancer. She'd been through radiation treatment. Cristina rounded on her case in the hopes that she'd be having a Whipple and that Cristina would be able to scrub in. Cristina eventually discovered that Liz was in the hospital to die and they wouldn't be doing a whipple on her. When she coded, Cristina tried to call a code, but Tyler informed her that Liz was DNR. Despite this, she tried to continue. Burke came in and physically stopped her from continuing compressions.

Rick was in the hospital for a prostate biopsy. Izzie went in to do an exam and he refused to be treated by her as he'd seen her in a magazine photo shoot. It was determined that his cancer hadn't spread out of his prostate. Dr. Victor wanted to do a radical prostatectomy, which would leave him impotent, in order to get all the cancer. Bailey insisted that Izzie stay on the case. When Izzie confronted Rick, he told her he used to fantasize about her and he didn't want her to witness his emasculation. When Izzie failed to answer a page promptly, George prepped the patient. In surgery, Bailey told Victor that the nerves were viable and they should try to save them. She even offered to finish so he could make his tee time. Izzie then came in and said the most important thing is giving a patient what he wants and what this patient wanted was his erection. Victor agreed to spare the nerves.

Jorge tripped and fell down stairs while holding a nail gun, resulting in him firing seven nails into his head. He came into the ER and was unable to see. Derek had Alex and George research if such a thing had happened before. Their research discovered very little other than that he should remove them quickly and watch for bleeding. When his wife revealed that he'd been having headaches and dizzy spells, Meredith suspected that something more was going on and that is what caused him to fall down the stairs. Derek was able to remove all seven screws, but he was concerned about the optic nerve and whether Jorge would regain his sight. The next morning, he was awake and able to see. Derek ordered an MRI to check for residual bleeding. The MRI revealed a tumor near his hypothalamus. Derek said that he could remove 99% of the tumor, but he couldn't get all of it. With that and chemo and radiation, Jorge had about 5-10 good years. Jorge agreed to the surgery, but was advised by Derek that it's located in an area of his brain where his memory and personality reside. Since Derek would have to remove part of the healthy brain tissue, he could lose his memories and personality. An alternative was proposed that meant focused radiation in the area, but it would only give him 3-5 years left. Derek left them to decide what they wanted to do. They chose the surgery. Meredith advised Zona, Jorge's wife, that while Jorge would be alive, he wouldn't be the husband she knew. Zona said that it was Jorge's choice and she'd stand by him.

Meredith went to visit her mother at Roseridge Home for Extended Care. She mentioned Elizabeth Fallon, whom Ellis remembered fondly. 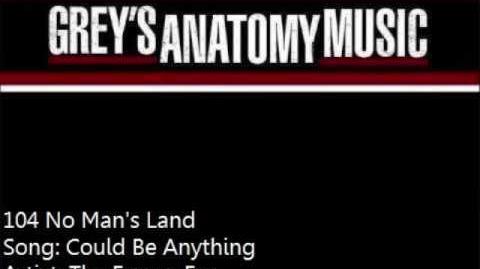 "Could Be Anything" - The Eames Era 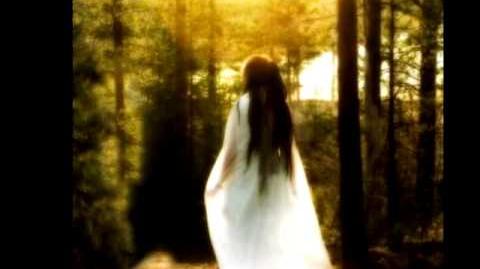 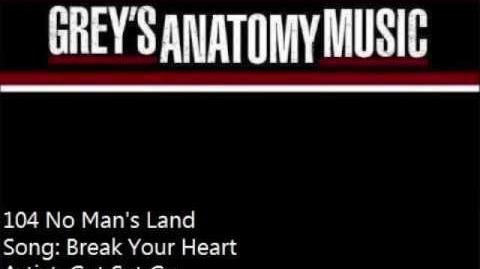 "Break Your Heart" - Get Set Go 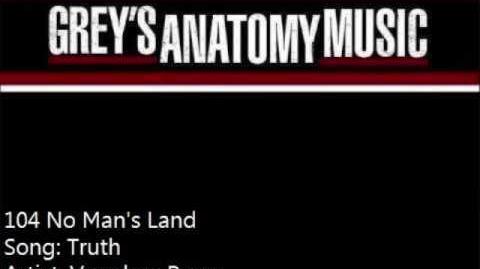 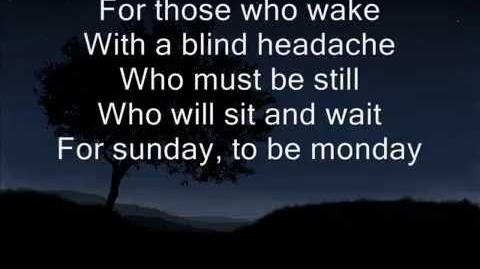 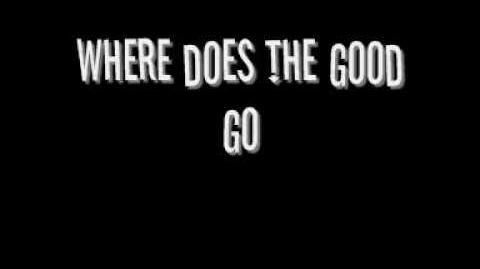 "Where Does the Good Go?" - Tegan and Sara 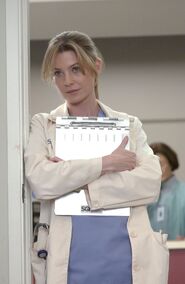 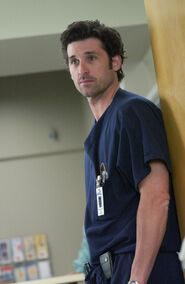 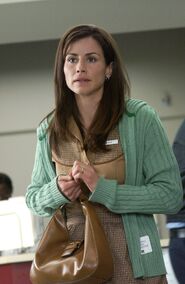 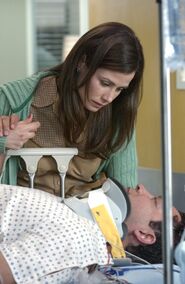 Meredith: Where are the tampons?
Izzie: He didn't buy them.
Meredith: You didn't buy them?
George: Men don't buy tampons.
Izzie: You know what. You are gonna have to get over the man thing, George. We're women! We have vaginas! Get used to it.
George: I am not your sister!

Izzie (to Alex): You want to see it? You really want to see it? Fine. (Takes off her coat) Let's look at that tattoo up close and personal, shall we? (Takes off her shirt) And what are these? Oh, my God! Breasts! How does anybody practice medicine hauling these things around? (Takes her hair down) And what do we got back here? Let's see if I remember my anatomy. (Takes her pants off) Glutes, right? Let's study them, shall we? Gather around and check out the booty that put Izzie Stevens through med school. Have you had enough or should I continue? Because I have a few more very interesting tattoos. (Alex looks ashamed.) You want to call me Dr. Model? That's fine. Just remember that while you're sitting on 200 grand of student loans, I'm out of debt.

Alex: Morning, Dr. Model.
Izzie: Dr. Evil Spawn.
Alex: (sees Izzie's tattoo) Ooh, nice tat. They airbrush that out for that catalogs?
Izzie: I don't know. What do they do for the 666 on your skull?

George: Yeah, could we not talk about it here?
Izzie: What, tampons?
George: Did you not hear a word I said?
Izzie: You're a man. We know.
Alex: Talk about shrinking the salamander.

Izzie: This is who I was. It has nothing to do with who I am now. I'm a physician, a surgeon. And I am just as qualified as any other intern on this floor. So, you're just gonna have to get over you chauvinist crap and allow me to do my job.
Rick: I'm sure you're a very good doctor.
Izzie: Then what is your problem?
Rick: Look. I fantasized about you, about the woman in this photo, whoever she is. I'm not proud of it, but it's a fact. Do you know what they're gonna do to me today? I have cancer. And they're gonna lift up my legs and expose me to the world and cut out my prostate and my nerves, effectively neuter me. So, is it so hard to understand that I don't want the woman who's in that photo to witness my emasculation?

Izzie: You said, "I am not your sister." Do you feel like I was emasculating you?
George: No. No. I'm too masculine to be emasculated.
Izzie: I'm sorry.
George: Guess you put Dr. Model to rest.
Izzie: Guess I did.

Izzie: I'm sorry, Dr. Bailey. Dr. Victor, I agree with her. You just can't... You have to save the nerves!
Harry: What?
Izzie: The nerves, you have to save them.
Miranda: Dr. Stevens, I can handle this.
Izzie: You told me the most important thing is giving the patient what they want. What Humphrey wants is his erection.
Harry: She's yours. You get her out.
Miranda: Can't do that, sir. You know how these young puppies are.
Harry: I'm going to tell Richard about both of you.
Miranda: You do that. In the meantime, let's pretend it's you on this table and give this a try.

George: Better not be using my toothbrush.
Izzie: I'm not. (looks at the toothbrush she's using and smiles)

Retrieved from "https://greysanatomy.fandom.com/wiki/No_Man%27s_Land?oldid=319013"
Community content is available under CC-BY-SA unless otherwise noted.