Hold Back the River

Noah Brosniak is a child with an inoperable brain tumor that was causing seizures.

Noah's mother, Liz, was 23 weeks pregnant when she had pressure in her lower back, so she went to the hospital. While Arizona was examining Liz, she noticed that Noah had an unnatural-sounding laugh. She asked Alex and Amelia to take a look at him. They took him for an MRI, which showed a brain tumor near his brain stem. Liz was then told that the tumor was inoperable, though Amelia and Alex believed the research they were doing for Kimmie Park might also work for Noah. ("Caught Somewhere in Time")

Noah later underwent the treatment and despite the difficulty, Noah woke up after his procedure and was awake and laughing normally at a video with his mother. ("Hold Back the River")

He is being raised by a single mother who is expecting his little sister.

While his mother was getting an exam, he played with Sofia, who had come to work with her mom for the day. 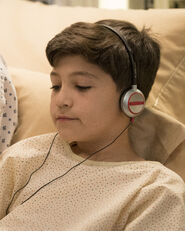 Retrieved from "https://greysanatomy.fandom.com/wiki/Noah_Brosniak?oldid=278385"
Community content is available under CC-BY-SA unless otherwise noted.