Derek scrubbed in on Richard's first surgery after his brain surgery. During the surgery, Linda informed him that he was being paged away, so he had to leave. She also later informed the doctors that the leg Cristina had brought back was a woman's leg. ("Into You Like a Train")

When Burke's custom caps were lost in the laundry, she assured him they didn't have any while getting him dressed for surgery. ("Superstition")

When Burke was shot outside the hospital, Linda helped the doctors treat him in the ER. ("Deterioration of the Fight or Flight Response")

When Janelle's heart started beating, Linda confirmed to Cristina that she was ready to come off bypass. She asked Cristina how she wanted to proceed and Cristina asked her to page anyone who could help her get the patient off bypass. ("Staring at the Sun")

Linda was in Harold O'Malley's valve replacement and informed the doctors when his blood pressure dropped. ("Don't Stand So Close to Me")

When Ellis coded, Linda helped Derek attempt to resuscitate her.

When the navigational system failed during Mary's surgery, Linda asked if they should get another machine. ("Crash Into Me, Part 1")

Linda assisted in The Emir's surgery. ("Something's Gotta Give")

When Lucas and Reilly Nash's parents arrived at the hospital and were asking for an update, Linda informed Owen, who was operating on Lucas. ("Slow Night, So Long")

She assisted Bailey as she placed a graft in Seth Lepik's forearm. ("Sleeping Monster")

When Dean Parson was having surgery after being injured by a roller coaster, Linda was in the surgery and informed Owen when Amelia brought in a CT. ("Who Lives, Who Dies, Who Tells Your Story")

When Mrs. Richardson arrived at the hospital when she learned her sons were there, Linda came into the OR to inform the doctors of her arrival. ("You Really Got a Hold on Me")

When Mr. Gustav was having a gastrectomy, Linda showed Jo his pre-op scans at her request. ("Judgment Day")

She is a scrub nurse. 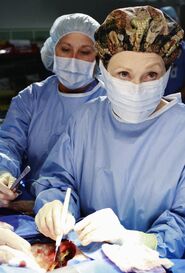 Retrieved from "https://greysanatomy.fandom.com/wiki/Nurse_Linda?oldid=310515"
Community content is available under CC-BY-SA unless otherwise noted.