The doctors watch the final patient be treated

For unknown reasons, Jared Swork took a gun to Pacific College and opened fire, shooting several people. The massacre ended when he exchanged fire with Michael Fazioli. Each of them was shot in the exchange. Several of the victims were then taken to Seattle Grace Mercy West Hospital to be treated, including Jared himself, though they were initially unaware he was the shooter.

Cristina, who was at the site of the shooting, rode in the ambulance with Jared and cracked his chest. Once he arrived at the hospital, he was taken into surgery. After they found out he was the shooter, Jackson and one of the nurses refused to continue to work on him, leaving the OR.

Mike, who had been shot in the abdomen, was taken in for labs. Before he could have surgery, Marty Hancock requested that he be woken up in order to identify the shooter, which he did. Due to the large volume of patients, he had his surgery in a trauma room and it was successful.

John Sturgeon, a professor at Pacific College, fell out a fourth-story window while attempting to get out onto the roof after evacuating his students. His brain herniated and both sides of his skull had to be removed and placed in his abdomen in order to allow the brain room to swell.

Kelly Keck, a young student, was shot in the leg and abdomen. Stark initially believed she'd have to lose the leg, but Arizona disagreed and recruited Callie to help her save the leg.

Chuck Fowler had a graze injury to his neck. The wound was debrided and Chuck had a vascular repair. He started crashing, but they were able to resuscitate him.

At the end of the day, Jared was the last patient left in surgery. When his surgery was completed, Richard announced they hadn't lost a single patient that day. 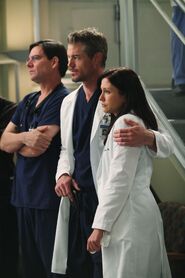