Pam Reiter is pregnant woman who came into the ER during a rain storm.

Pam pulled into the ER and called for help. Her husband, Todd, couldn't move his legs, which is why she drove them to the hospital even though she was in labor. They both said it was in Todd's head, because he'd had symptoms like that during her previous pregnancies.

In the ER, Todd was put in a collar and Pam was determined to be only at four centimeters, meaning they had time before she'd give birth. Todd's legs stopped tingling and he was able to move them again. Despite him having experienced sympathetic symptoms with his wife's three prior pregnancies, James wanted a neuro consult for Todd. Amelia looked at his chart and said she'd see him in her office later that week. Despite that, James ordered a CT.

Pam continued to labor down in the ER while they waited for a bed in labor and delivery to become available.

Pam had late decels and needed a c-section. Because the ORs were all full, they prepared to do a c-section in the ER. As they prepared, doctors came in to take Todd, who needed surgery for a spinal infection, which had caused his transient weakness. During the c-section, a uterine artery was lacerated, but Jake was able to stop the bleeding as Addison tended to the baby. Addison then introduced Pam to her daughter.

After Todd's surgery, Addison took the baby to see him. He couldn't hold her because of his surgery, but he was able to give her a kiss.

She is married to Todd Reiter. At the time of her fourth pregnancy, they'd been married for 15 years.

Todd and Pam have four kids. With Pam's first pregnancy, Todd got rashes. The second brought abdominal cramps. The third one had fainting spells. During the fourth, he had transient weakness and paralysis in his legs, though that was found to be due to an infection. 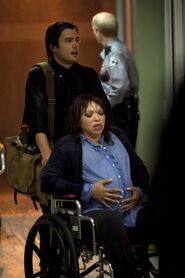 Retrieved from "https://greysanatomy.fandom.com/wiki/Pam_Reiter?oldid=240636"
Community content is available under CC-BY-SA unless otherwise noted.