A House Is Not a Home

Paul Montgomery is the father of Travis Montgomery.

In 2012, Paul's son, Travis, became engaged to Michael. He and his wife were not pleased by this, as they were ashamed that their son was gay. Paul wanted them to elope, believing a public wedding was putting them too much on display, but Travis disagreed. Nari agreed to read a poem she'd written at the wedding, but on the day of the wedding, neither she nor her husband showed up. She read the poem to them privately, but Travis said it wasn't enough and it was too late. ("Ice Ice Baby")

During the covid-19 pandemic, Travis delivered groceries and supplies to his parents' house. During this time, Travis was also shocked to find his father on a dating app for men. His profile picture showed Paul wearing nothing but chinos and a belt that Travis had gifted him, captioned with the phrase "Let me be your daddy." ("Nothing Seems the Same")

Despite the pandemic, Paul kept finding men to hook up with. He would tell his wife he was golfing when he was meeting them. His son, realizing what he was doing, confronted him, saying he knew about his profile. Paul denied it and Travis let it go, saying he was too tired to have the conversation. ("Don't Look Back in Anger")

Later, Paul came to the station to drop off a tin of cookies Nari had made for Travis. He also asked Travis to come over and help them install security on their computer as someone had hacked his Facebook and stolen his picture and he worried where it would end up. Travis knew he was lying to try to save face, but he had to leave on a call, so he simply gave the cookies back to Paul and said maybe they'd help him wash down the shame. ("Learning to Fly")

When the wife of man Paul was sleeping with, whom he claimed to Nari was his golfing buddy, tested positive for COVID, Paul and Nari came to the station to get tested for COVID during the COVID testing event. When Travis learned what had happened, he had them come inside, where he questioned his father about his exposure. His father still refused to admit what had really happened. After they were tested, Travis went to see them to their car. After his mom got in, he spoke to his dad about how it made him feel to be rejected when he came out and how much it would have helped him to have his father validate how he was feeling instead of rejecting him. ("Save Yourself")

Paul and Nari came to station 19 for Thanksgiving. Throughout the day, Paul received several messages Travis knew to be from Kyle. Travis deduced that he was planning to meet up with Kyle at some point during the day. While sharing what they were thankful for, Travis made several pointed comments to Paul, leading to him coming out and confessing his affair to Nari, who left the room.

Later, Paul admitted to Travis that he felt free because Nari knew. But he decided not to leave to meet up with Kyle because he loves Nari and wanted to show her that. As they ate dinner, Travis told Paul he knew the pain he was feeling and assured him it would get better. ("Little Girl Blue")

Paul came home one day to find that Nari had packed her things and was moving out. The two of them hugged. ("A House Is Not a Home")

He has been married to Nari Montgomery for 37 years. He is secretly attracted to men and uses a gay dating app.

Months after falling in love with a man, he remained married to Nari. ("Can't Feel My Face")

During the pandemic, Paul began hooking up with men under the guise of playing golf. When Travis asked him about it after he was exposed to COVID through this, he said it was one consistent man. ("Save Yourself")

Paul later told Travis that he was in love with that man, the first time he'd ever truly been in love in his life. ("Forever and Ever, Amen")

A year later, the affair continued. Paul went on a trip to San Diego with Kyle. As a cover, he told Nari he was going to a conference. ("100% or Nothing")

Repressing his own sexuality led him to disapprove of Travis coming out as gay. He told Travis he was ashamed of him and refused to attend Travis and Michael's wedding. 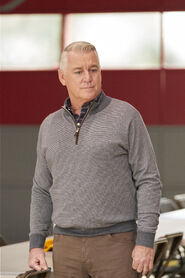