watch 01:43
Grey's Anatomy Profile: Penelope Blake
Do you like this video?

How to Save a Life

Samantha Sloyan
Penelope Blake is a surgical resident who currently represents Grey Sloan Memorial Hospital at the Preminger Research Center. Before that, she was a resident at Dillard Medical Center, prior to its closure, who treated Derek Shepherd after his car accident.

As a child, Penny moved every two years due to her mother's job. ("Guess Who's Coming to Dinner")

She hated high school, which she attributes to cheerleaders. ("All Eyez on Me")

Penny was one of the doctors who tended to Derek Shepherd when he came into the Dillard ER. She put in his chest tube and his thoughts indicated that he liked her, said she was smart. She wanted to order a head CT, but Paul Castello insisted that they didn't have time and they needed to take him into surgery to get his abdominal bleeding under control.

While they were on the way to the OR, she made one final plea to get the CT, since he was stable. Paul again declined and they took Derek into surgery and started operating. When he became unstable, Paul finally remembered that he'd had a head laceration and had the anesthesiologist check his eyes, which revealed a blown right pupil. They paged the neurosurgeon, Dr. Cohn, who said he'd be there in 20 minutes because he was at a dinner. Despite this, it took him an hour and a half to arrive. Penny called him out on this and he responded that they should have gotten a head CT and they would have paged him sooner. When she continued to say that he should have gotten there faster because Derek might have had a chance if he had, he kicked her out of the OR.

She went with Dr. Cohn to speak to Meredith about Derek's death and Meredith told them that the decision not to get a CT was a bad decision.

When Meredith exited the hospital, Penny was on a bench outside crying. She went up to Meredith to apologize again, but Meredith told her that Derek was her one, the patient whose face she'll see every time she treats a patient. He'll haunt her and remind her that he died on her watch. It'll either make her a better doctor or she'll quit and Meredith says she doesn't get to spend what would have been the rest of Derek's life being a quitter and then sends her back inside because she's not saving any lives outside. ("How to Save a Life")

Long after Derek's death, Penny began seeing Callie Torres. They dated for a while and Callie invited Penny to come to a dinner party at Meredith's with her. She and Meredith were both shocked to see each other when Callie and Penny arrived at the party. Penny did not know that Callie was good friends with Derek and Meredith and Callie did not know about Penny being a resident at the hospital Derek died in. ("Old Time Rock and Roll")

Penny tried repeatedly to get Callie to let them leave the party, but Callie, thinking it was just nerves about meeting Arizona and her other friends, insisted that Penny stay, even when Callie herself got called to the hospital. Meredith kept quiet about the connection to Penny, but it came out when Penny was asked about why she was transferring to Grey Sloan Memorial Hospital. The doctors were all shocked by the news and Penny left the house. Later, after coming back in to use the bathroom, Penny met up with Meredith, who had come back downstairs after going up to hide in her bedroom. Penny said she'd ask for a transfer so they wouldn't have to work together, but Meredith told her that she'd see her on Monday and not to be late. ("Guess Who's Coming to Dinner")

On her first day at GSM, Penny was assigned to Meredith Grey's service. She helped Meredith treat Robert Matthews, but Meredith critiqued her every step of the way and eventually kicked her off her service. However, after speaking to Richard, Meredith agreed to give Penny another chance and asked for her on her service for the rest of the week. ("The Me Nobody Knows")

Meredith continued to have Penny on her service, running her ragged. Penny eventually confronted Meredith, saying that she could hate her, but she hadn't let Penny quit, so she shouldn't quit either. And if Meredith wasn't going to teach her, she should let her go. Meredith later let her help with a kidney transplant. ("Something Against You")

Penny found Meredith after she was attacked by Lou. She helped treat her initial injuries and then followed her recovery. When Meredith had a panic attack after a visit with her kids didn't go well, Penny cut the wires holding the broken jaw together. Jackson yelled at her for it, but she defended that Meredith needed air and her jaw could be re-wired the next morning. ("The Sound of Silence")

When Sofia came into the ER, Penny was given the case because of her relationship with Callie. However, she hadn't yet met Sofia. When Callie found out that Penny had treated Sofia without paging her, she claimed that Arizona wasn't comfortable with Penny meeting Sofia yet. Penny immediately went to Arizona to apologize, but Arizona said that she had no part in it and Callie had lied. Penny believed it was because she'd told Callie she loved her the previous night. Callie later told Penny they were on the same page and invited her to get ice cream with her and Sofia. ("When It Hurts So Bad")

When the opportunity came up for Penny to apply for the Preminger Grant, she initially decided she didn't want to because she believed she didn't have a chance at it. However, she ultimately decided to apply after overhearing other residents dismissing her. She had support of several attendings and was given the grant, which funds a year of residential research at the Preminger Research Center. ("I Wear the Face")

When the time came to say whether or not she was accepting the grant, Penny consulted with Callie, not wanting to make a decision without talking to her first. After talking, they decided they'd both go to New York. ("It's Alright, Ma (I'm Only Bleeding)")

Penny testified on Callie's behalf at the hearing to determine who would receive custody of Sofia. Despite being flustered and unable to remember what grade Sofia was in or what she'd been wearing that day, she demonstrated knowledge of Sofia's likes and routine. After Arizona was awarded sole custody of Sofia, Penny tried to comfort Callie, but Callie pulled away from her. ("Mama Tried")

Penny wanted to delay her move to New York because Callie wouldn't be able to join her with Sofia. However, Callie told her it would just delay the inevitable resentment and broken promises if they tried long distance and they ended things. Penny then packed up her things and told Meredith she was accelerating her departure. ("At Last")

Penny was dating Callie Torres. She was not aware of Callie's friendship with Meredith Grey until Callie brought her to a dinner party at Meredith's House. ("Old Time Rock and Roll")

After the dinner party, they didn't speak for a few days because Penny thought Callie was taking Meredith's side, though Callie said she was on both sides. However, after Penny's first day at Grey Sloan Memorial, they both agreed they were in it. ("The Me Nobody Knows")

Penny constantly being on Meredith's service upset Callie, which strained their relationship. ("Things We Lost in the Fire")

They broke up briefly, but they met in a stairwell at work and Callie admitted to Penny that she missed her and Penny kissed her. ("All I Want is You")

One night, as they were in bed getting ready to sleep, Penny told Callie she loved her. Callie replied, "Thank you." The next day, after Penny treated Sofia, Callie told her that she was on the same page and she'd been there for a while, but she had a history of being on that page too early in the past, which is why she was hesitant. ("When It Hurts So Bad")

When Penny won the Preminger Grant, which would require moving to New York for a year, she didn't ask Callie to go with her, feeling it wasn't possible. However, Callie told her to do it and they decided to move to New York together with Sofia. ("It's Alright, Ma (I'm Only Bleeding)")

When Callie lost the case for sole custody, things quickly soured between her and Penny. Penny told Callie she wanted to wait to leave until things were good between them again, but Callie said it wouldn't work because she couldn't leave without Sofia and long-distance would fizzle out quickly. When Penny asked if they were breaking up, Callie said it would be best to end things now instead of dragging it out. ("At Last")

After Penny left, Callie was miserable, which led Arizona to decide to allow Callie to take Sofia to New York with her and have her for a greater part of the year, leading Callie to move to New York to be with Penny again. ("Family Affair")

They broke up an undetermined time later, revealed when Arizona comments that she and Callie are both single and making each other smile again. ("All of Me")

Her mother is a petroleum seismologist, so they moved every two years.

Paul, one of her co-workers, seemed to have little respect for her. Over her objections, he refused to take Derek for the head CT that might have saved his life. Derek's thoughts said that Paul didn't like Penny because she was smarter than him, even though she's younger, and probably because she's a woman. ("How to Save a Life")

Penny had a rough start with Meredith during her first days at Grey Sloan Memorial. She was put under Meredith's service despite hating her for "killing Derek". Meredith was asking her questions about procedures while they work on Robert Matthews but was being intimidated by her, being unable to answer her questions. ("The Me Nobody Knows")

After being reprimanded by Webber, Meredith started trusting Penny with procedures. However, she was giving her a lot of workload, causing Penny to call Meredith out. ("Something Against You")

Penny was seen talking to Meredith while they were on their way to save Brian Carson, seemingly asking to join the team but Jo Wilson was already going. ("All Eyez on Me")

When Penny was hired to work at GSM, Amelia refused to work with her. However, they were forced to work together when Richard Webber scrambled the attending/resident pairs. After seeing Penny work on Griffin McColl, Amelia admitted that she was a born neurosurgeon, which meant Amelia would have to start teaching her. ("Odd Man Out") 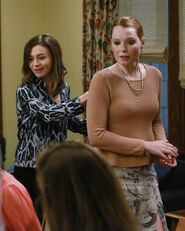 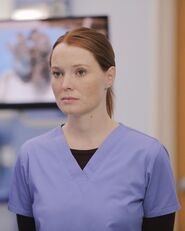 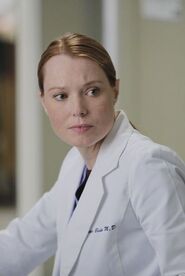 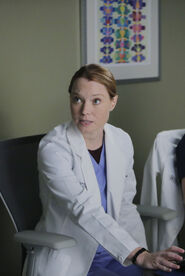 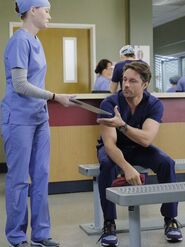 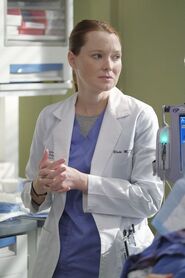 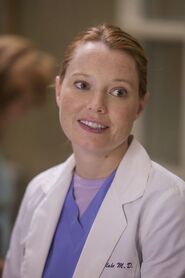 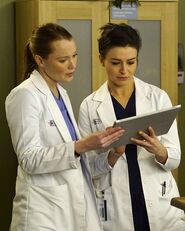 Retrieved from "https://greysanatomy.fandom.com/wiki/Penelope_Blake?oldid=328875"
Community content is available under CC-BY-SA unless otherwise noted.