Ray Sutera is a paramedic in Seattle.

After the train crash, Ray came into the ER carrying a severed leg that he'd found, followed by a patient who had lost a leg. ("Into You Like a Train")

When Speed collapsed in a restaurant from an aortic dissection, Ray was in the ambulance that came to take him to the hospital. He question who Burke was when he started giving Ray orders, but was informed that he was a cardiothoracic surgeon would be operating on him. ("Let It Be")

When Denny Duquette, Jr. had a cardiac episode, Ray was on the rig that brought him to the ER. ("What Have I Done to Deserve This?")

He brought in a patient that Bailey ended up operating on. ("Band-Aid Covers the Bullet Hole")

Ray was on the rig that brought in Melanie Reynolds, a pregnant woman who was in a car accident. ("Damage Case")

Ray was on the rig that brought in Mia Hanson after she was run over by a car. He told the doctors she'd been backed over by her mother's SUV. ("Staring at the Sun")

Ray brought in a patient who'd had no pulse in the field and had a prolonged extraction time. ("Let the Truth Sting")

When Erin Shandley was in a car accident, Ray was on the rig that brought her to the hospital. ("Haunt You Every Day")

After dropping off Jacob Nolston, Ray and his partner, Stan Giamatti, went to leave, but they were unable to when another ambulance crashed into theirs, flipping them over and trapping them.

Stan told Ray that when he got out, he'd have a great story to tell to pick up women.

After Stan said goodbye to his wife, Sara, they started to open the rig. However, Stan had them stop because he saw an oxygen regulator imbedded in Ray's back and knew he'd die if they moved him. They knew he had a cardiac tamponade, so they brought out everything they needed and planned to stabilize him in the ambulance before moving him. After he saw that Stan had died, Ray started to panic, but they told him he needed to remain still so he wouldn't do more damage. Meredith said she could crawl into the ambulance to do the pericardiocentesis. ("Crash Into Me, Part 1")

Meredith crawled into the ambulance and used an ultrasound to look at his heart. They had to get Erica Hahn to come out because the anatomy was messed up by him hanging upside down. They got ready to do the pericardiocentesis, but Ray stopped then because he was scared and he didn't want to die scared. They told him it was okay to be scared and then inserted the needle to remove the blood.

After he was stable, they pulled Ray out of the rig and took him into surgery. Despite a complication, Ray survived. Sara came to see him after surgery and was told that the hope was he'd be just fine. ("Crash Into Me, Part 2")

Ray brought in Clara Ferguson after both her arms and one of her legs were traumatically amputated in a speedboating accident. ("Good Mourning")

Ray brought in Frank Newsbaum after he was stabbed repeatedly. ("Invasion")

When Jared Swork opened fire on Pacific College, Ray was a paramedic who responded. He unknowingly treated Jared and took him to the hospital. ("Disarm")

When a roller coaster derailed and injured several people, Ray brought in Dean Parson, who had been injured blocking kids from injury. ("Who Lives, Who Dies, Who Tells Your Story")

On the day of Meredith's hearing to determine if she would lose her medical license, Ray was among those who testified on her behalf. He talked about the ambulance crash and how Meredith crawled into the ambulance and saved his life. ("My Shot")

He and Stan Giamatti were partners and best friends until Stan's death. Ray was there when Stan met his wife, Sara. After Stan's death, Sara came to visit Ray in the hospital. 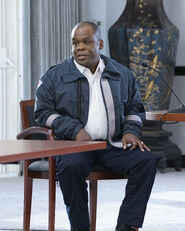 Retrieved from "https://greysanatomy.fandom.com/wiki/Ray_Sutera?oldid=294658"
Community content is available under CC-BY-SA unless otherwise noted.