Reed Adamson was a surgical resident at Seattle Grace Mercy West Hospital following the merger. She was murdered by grieving widower, Gary Clark because she refused to help him locate Derek Shepherd, as she had a patient to attend to.

Reed transferred from Mercy West Medical Center to the newly formed Seattle Grace Mercy West Hospital. On her first day, she argued with Izzie after taking George's cubby, which they had been leaving empty. She also butted heads with Alex when they fought over who would be treating Michael Goldman. ("Invasion")

After a fire at a local hotel, several people were brought to the ER with burns. Reed examined Danny Becker and proclaimed that he was perfectly fine. She then moved on to work on Roy Mackinaw, a firefighter who was injured during the rescue efforts. All the doctors who worked in the ER that night were interviewed when Cathy Becker died under suspicious circumstances. She ultimately solved the mystery of Cathy's death, which resulted in April Kepner being fired. ("I Saw What I Saw")

When Derek was looking for naturals in microsurgery, Reed attempted it, but failed. She and Alex were then put in charge of rounding on the cancelled craniotomies. ("Give Peace a Chance")

Reed participated in the documentary someone was making about doctors at the hospital. ("Seattle Grace: On Call")

While working on Tom Kates, Reed flirted with Alex, implying that she'd trade sexual favors for the chance to scrub in. He later confronted her about it, saying that if she wanted sex, she should just ask for sex and she should suck up to attendings for surgery. ("Blink")

When Derek Shepherd became Chief after Richard Webber was ousted, the Mercy West residents were all worried that he'd fire them because he hated the merger. They also gossiped about why Richard had been ousted. ("State of Love and Trust")

The residents were forced to attend sensitivity training, led by Miranda Bailey. She taught "Reaction, Observation, Communication" to improve their interactions with patients whose cases needed more sensitivity. ("How Insensitive")

While looking for supplies for a patient, Gary Clark asked her where Derek's office was. She said she was a surgeon, not a tour guide and needed to attend to a patient having seizures. He immediately shot her in the head, killing her instantly. Her body was discovered by April Kepner, who slipped in her blood as she passed. ("Sanctuary")

Reed was abrasive to those she didn't like or didn't know well, particularly the competing residents from Seattle Grace Hospital upon the merger.

According to Charles, she dates a lot of men. ("Seattle Grace: On Call")

Upon arriving at Seattle Grace, she had an interest in Alex Karev, stating there was something special about him during a conversation with Jackson Avery. She flirted with him for a while and comforted him during his divorce with Izzie Stevens, but he showed no real interest in her. ("Invest in Love")

She moved on and had a one night stand with Mark after a party at Derek Shepherd's home while he was also seeing Teddy Altman, but Mark and Teddy weren't exclusive at the time. Teddy actually walked in on them shortly after they had had sex. ("Shiny Happy People")

Charles was shown to have a large crush on her. She, in return, was the only person to call him Charlie. When they were interviewed for a documentary, she told the interviewer that Charlie was like a little brother to her and they'd known each other since medical school. ("Seattle Grace: On Call")

She and April were best friends and roommates until Reed's death. While defending her to Cristina Yang, she even said that April was a better doctor than she was.

Prior to the merger, she worked at Mercy West Medical Center, but came to Seattle Grace Mercy West Hospital following the merger. She was supposed to finish her residency there, but this was cut short when she was murdered by Gary Clark. 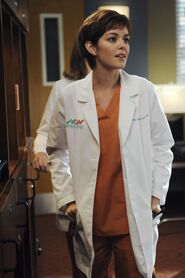 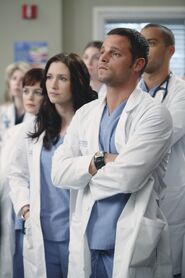 Retrieved from "https://greysanatomy.fandom.com/wiki/Reed_Adamson?oldid=307620"
Community content is available under CC-BY-SA unless otherwise noted.