No Good at Saying Sorry (One More Chance)

Robbie Stevens is the mother of Izzie Stevens.

When Izzie was a teenager, Robbie spent all of her money on psychics and then used Izzie's money from waitressing that she was saving for medical school. Izzie later became a lingerie model to make enough money to pay for medical school herself. They had a somewhat tense relationship after that.

Robbie visited Seattle Grace for the first time when Bailey called her. She was not too worried about the cancer originally, having a friend who had breast cancer, had her breasts cut off, and now had cantaloupes. When Izzie tried to explain her cancer properly, her mother got scared so Izzie and Bailey lied and told her that the cancer was almost gone so Robbie would leave Seattle Grace, unaware of the true extent of Izzie's cancer. Before she left, she listed lots of people from the trailer park she had worried and told Izzie that although she wasn't very smart, she always knew that Izzie was too good for the trailer park. ("No Good at Saying Sorry (One More Chance)")

Later, after Izzie was no longer a surgical cancer patient, Robbie sent her daughter a wig to cover up her "chemo hair". ("I Always Feel Like Somebody's Watchin' Me")

After Izzie was fired, she went to stay with her mother. ("I Saw What I Saw")

Robbie has one daughter, Izzie Stevens but her relationship with Izzie's father is never mentioned. Upon coming to Seattle Grace, Robbie flirted with Alex Karev but she stopped after he called her "ma'am". When she came into Izzie's room, she had a ring on her finger.

When Izzie was younger, she had to get a job as a waitress and later a model as her mother would spend all her money on psychics. Even after Izzie left and became a doctor, Robbie continued.

Her mother had a tumor on her thyroid and eventually died of thyroid cancer. ("No Good at Saying Sorry (One More Chance)")

Jade lived in the same trailer park as Robbie and had survived breast cancer. 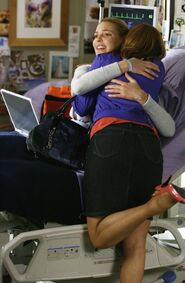 Retrieved from "https://greysanatomy.fandom.com/wiki/Robbie_Stevens?oldid=286193"
Community content is available under CC-BY-SA unless otherwise noted.