Coming to Work at SGMWEdit

When Arizona Robbins left Seattle to move to Malawi after winning a Carter Madison Grant, Stark was hired to replace her. On his first day, he did a liver transplant on Lisa Collis, a four month old with biliary atresia. He was unable to close because of the swelling. Alex Karev had the idea to use a sterilized ping pong ball to hold the place, which was safer than a sponge because there was little risk for infection and her liver would just grow around it. Alex presented the idea to Stark, who rejected it, saying that he'd asked Alex to take care of his post-ops and not "play with balls!" However, Alex later found out that Stark had taken Lisa into surgery and was claiming credit for the idea. The surgery was successful. ("Something's Gotta Give")

Stark left Meredith Grey in charge of his patients overnight while he went out. When Drew McNeil had severe post-op pain, Meredith paged him, but he quickly dismissed the pain as gas and left. When a CT revealed a perforated ulcer, Meredith paged Stark again, but he didn't answer his pages, so they took Drew into surgery without him. When he found out what they had done, he yelled at them, saying he would have taken the heat if something had gone wrong. ("Slow Night, So Long")

When Jared Swork opened fire on Pacific College, he shot Kelly Keck, a 15 year old. Stark took her into surgery. Because of her injuries, he believed amputating her leg was the safest option. However, Alex Karev believed that Callie Torres could save the leg, so he called to Arizona Robbins, who was watching from the gallery, for support. She had Alex physically stop Stark while she went to get operating privileges and Callie to save the leg. When she returned and took over, Stark was shocked and left the OR in disbelief. He complained to Webber about it, but Webber told him to go save a life. When the doctors later all started to laugh after learning no one had died in the shooting, he was incredulous and declared that he hated the hospital. ("Disarm")

Stark started to get close after they worked on the case of Kyle Baker, a ten year old with a cystic hygroma that was nearly cutting off his airway. Stark wanted to call child protective services on the parents because they let it get so bad, but April figured out a compromise, which involved Kyle coming in regularly for exams, which April agreed to do personally. He later invited her to have dinner with him. After thinking about it, she accepted. ("Not Responsible")

He continued to work closely with April as they socialized outside of work. This came to a head when he invited her to come watch a movie at his house and her fellow residents convinced her that he was expecting sex. She panicked and cancelled their date. He realized what was happening and they ended things because she thought of him as a friend and he didn't want to be just her friend. ("This is How We Do It")

After that conversation, he started to ignore her and insisted that she call him Dr. Stark instead of Robert. ("It's a Long Way Back")

After Sofia Robbin Sloan Torres was born extremely prematurely, Callie was unable to see her. Cristina went to Stark to ask about it, but he said that Sofia wasn't stable enough to move, so he forced her to wait.

Because of her prematurity, Sofia's PDA hadn't closed by the time she was five weeks old. Despite Arizona's attempts to get another pediatric surgeon to operate, she was unable to find one. Stark therefore operated and allowed Arizona to be in the OR to watch. However, Arizona was unable to handle it when Sofia started to bleed out. After Arizona left the OR suddenly, Stark was able to save her and finish the surgery. ("It's a Long Way Back")

When Alex had the idea to bring several African patients to Seattle to have surgery, he made a presentation to Stark in order to get funding to pay for the project. However, Stark refused. ("It's a Long Way Back")

When the African children started arriving in Seattle for their surgeries, he worked on the case of Asha with April and Owen. He became frustrated when April focused more on Asha and how scared she was than the medicine. He later found her making porridge in the hopes that she'd be able to get Asha to eat something. He scolded her for it, but later endorsed her as a potential Chief Resident to Owen. ("White Wedding")

After working together on Kyle Baker, Stark was impressed that April had convinced him to change his mind and asked her out on a date as a result. She took some time to think about it, but accepted his invitation. ("Not Responsible")

They had several outings together when one time, April said she'd have to cancel because she wasn't sure when she'd get out of the hospital, so he suggested that she just come to his house, where they'd watch a movie and have dinner. When the other residents convinced her he wanted to have sex with her, she backed out. He figured out that she wanted to break things off with her, citing the age difference. She clarified that she thought of them as more like friends, but he said he didn't want her to be just his friend. ("This is How We Do It")

After that conversation, he started to ignore her. When she said she wished other people could get to know the Robert she knew, he simply said that she should call him Dr. Stark. ("It's a Long Way Back")

While working on Asha, April confronted Stark about ignoring her, but he insisted that he was treating her just like any other resident. ("White Wedding")

Under contract for a year, Stark served as the department head even after Robbins returned. Described as a lazy doctor and a complacent and self-satisfied attending, Stark represented the antithesis of attending surgeons commonly employed at Seattle Grace Mercy West Hospital. Stark had an antagonistic disposition with most of the hospital staff.

Upon his arrival, he formed a negative relationship with Alex Karev when he refused to consider using Alex's idea for a liver transplant. Alex later discovered Stark used the idea, but said it was his own. This negative relationship was reinforced when Stark insisted on amputating a teenage girl's leg unnecessarily. Karev body blocked Stark from the leg while Arizona Robbins went to get her privileges reinstated. When she returned, she kicked Stark out of the OR, and she and Callie were able to save the leg. This showed that he values being right and doing things his way over helping a child. He is also not very open to suggestions.

Despite his negative qualities, Stark proved to be a competent surgeon when he performed life-saving surgery on Callie, Arizona, and Mark's baby, Sofia after her PDA failed to close. Arizona, who had initially considered other surgeons for the job, expressed her gratitude to him regardless of their initial hostility.

Stark recommended Dr. April Kepner for the Chief Resident job, after she showed that she really cares for her patients (by making a porridge and learning some words in Swahili so that not everything would be new). 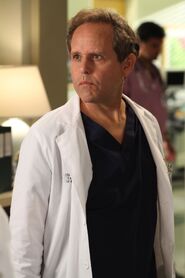 Retrieved from "https://greysanatomy.fandom.com/wiki/Robert_Stark?oldid=269906"
Community content is available under CC-BY-SA unless otherwise noted.