Robin is Meredith's supervisor while she does her community service.

Robin was supervising as Meredith and several others collected litter on the side of the road. When Meredith stopped working to talk to Suzie Wilson, Robin told her to get back to work before she told the court Meredith was in contempt. ("Nothing Left to Cling To")

Meredith noticed that Robin had a lump in her neck and looked at it closer. She then did an ultrasound of Robin's neck, which was concerning, so she called Jackson to do a biopsy. The biopsy revealed papillary thyroid cancer. Robin was upset because without Meredith, she'd have had to wait two more months and only been able to see the ENT if she could afford the time off work. She struggled to afford her asthma inhalers, so she felt that being diagnosed with cancer was forcing her to choose between bankruptcy or death. ("Back in the Saddle")

On the day of Meredith's hearing to determine if she would lose her medical license, Robin was among those who testified on her behalf. Robin told the board how Meredith diagnosed her cancer and arranged for her to have pro bono treatment, though Meredith hadn't taken credit for it. ("My Shot")

She works for the department of corrections. Part of her job is overseeing people who have been assigned to clean up litter as their community service. 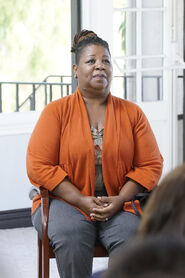 Retrieved from "https://greysanatomy.fandom.com/wiki/Robin_(Season_16)?oldid=294657"
Community content is available under CC-BY-SA unless otherwise noted.