Rosalind Warren is the sister of Ben Warren.

Rosalind went with her brother, Ben, after their father died to spread his ashes at a place where they frequently camped together, at his request.

After his ashes were spread, Rosalind and Ben raced back up a hill. At the top of the hill, Rosalind was winded and eventually collapsed. She was rushed to the ER, where she refused to cooperate with the doctors, insisting that she was fine despite evidence to the contrary. A test revealed an enlarged spleen, which had to be removed, so Meredith scheduled surgery to do that, but Meredith was also concerned about Rosalind's hormones levels because she appeared male, but had the hormone levels of a young woman. She eventually admitted that she was starting to take hormones to live life as a woman.

While waiting for her surgery, Rosalind started to cough up blood from a bleeding esophagus, which was caused by the off-shelf hormones she'd been taking. She was rushed into surgery to repair the bleeding and remove her spleen. After her surgery, her brother continued to reject her as a woman, asking why she didn't tell him sooner, as they've been close since they were kids. She tried to explain, but Ben stormed out.

Bailey brought Jackson Avery in for a plastics consult. Jackson introduced himself and asked for her name, saying he didn't figure she was sticking with Curtis. She told him she had chosen Rosalind and Jackson asked if he could call her that and then explained to her the steps for a healthy transition, saying the off-shelf hormones were done and anything she puts into her body is approved and regulated by the hospital from now on. And he also told her it was time to start seeing a therapist again. ("The Great Pretender")

When an earthquake struck Seattle, Ben was initially reluctant to call his sister because they still hadn't spoken after she came out to him. However, after spending the day working with Jackson Avery, Ben called Rosalind, who had a bookshelf fall at her home, but was okay. ("I Feel the Earth Move")

At the start of the COVID-19 pandemic, Rosalind came to live at her brother's house to watch their sons while Ben and Bailey both quarantined due to their work. Both boys enjoyed this change and wanted Rosalind to continue to stay with them. Rosalind brought them down to the hospital one evening to clap for the healthcare workers at the hospital along with the firefighters of station 19. ("Nothing Seems the Same") ("All Tomorrow's Parties")

When Bailey's mother died, Rosalind was there when Ben broke the news to Tuck. She helped Ben to understand that him lashing out at Ben wasn't personal and was merely an artifact of his grief. She encouraged Ben to help him process his grief and talk about his feelings, unlike how he had dealt with his grief when his own mother died when he was a little older than Tuck. ("Out of Control")

After the death of George Floyd, protests cropped around the country, including many in Seattle. Joey and Tuck asked Ben if they could join the protests, saying they wanted to march for themselves and for Rosalind. Rosalind said she'd take the lead from Ben. Ben finally agreed and they marched along the rest of Station 19. ("Get Up, Stand Up")

Rosalind is close to her brother, Ben. They shared a room for most of their lives, even into adulthood. Their relationship was strained when Rosalind came out to Ben as transgender. However, they have since rekindled their relationship and Rosalind even lived with Ben for a while.

Rosalind gets along well with her sister-in-law, Miranda, who in turn says that Rosalind is a sweetheart. When Miranda learned that Rosalind was transgender, she took the news in stride and supported Rosalind and tried to encourage Ben to be accepting and loving. 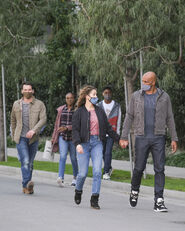