The promo picture of the season 8 main cast.

No matter how hot it gets - in the operating room or in the bedroom - the doctors of Seattle Grace know they can always lean on one another. As fifth year residents, it's do or die for the doctors, and things get bumpy when the chief makes a decision that rocks the entire staff. Outside the hospital, Meredith and Derek struggle to keep their relationship afloat while they try to adopt an orphaned baby girl, and Cristina wrestles with a difficult choice that threatens to ruin her marriage. 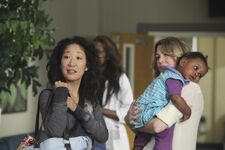 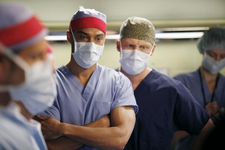 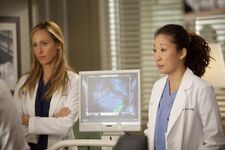 The boxset contains the 24 episodes of the season, with one extended. The DVD box contains 6 discs. Other set details are:

Additional to the episodes, the season 8 DVD set also contains a couple of special features: 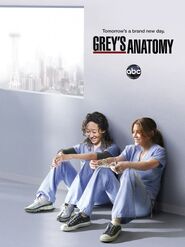 Add a photo to this gallery
Retrieved from "https://greysanatomy.fandom.com/wiki/Season_8_(Grey%27s_Anatomy)?oldid=120710"
Community content is available under CC-BY-SA unless otherwise noted.