The Skyscraper Fire was a fire that raged in a skyscraper in downtown Seattle.

Station 19 was called out to respond to a fire in a skyscraper in downtown Seattle. Four other stations had previous responded and the fire was still not contained. The fire was on the 25th floor and had not by that point spread to other floors. When they arrived, they were sent to the command center on the 22nd floor, where Ripley gave them assignments. Vic and Maya went up to the 28th floor, where about 100 people were trapped and waiting to be evacuated, while Andy, Jack, and Dean went to the 25th floor to fight the fire directly and Travis and Ben went to triage.

At triage, Ben and Travis treated patients with minor injuries and then sent them out of the building.

On the 28th floor, Vic and Maya worked with Molly to help keep people calm and away from the stairs.

While on the 26th floor putting out small fires, Jack and Dean came across a large supply of combustable materials, meaning the building needed to be evacuated immediately.

After the injured patients were evacuated from base camp, Ripley sent Travis and Ben to help with the evacuation of the 28th floor. They needed to use a PPV fan to draw smoke out of the stairwell so people could use the stairs to evacuate. Once the stairs were clear, Molly led the crowd slowly down the stairs. However, shortly after they left the floor, the fire started to jump floors, which caused the glass windows to shatter. This resulted in a stampede down the stairs, trampling Molly.

The blast sent a shard of glass into Travis's chest. Ben dragged him to the stairwell and started pulling him down the steps.

On the 26th floor, Jack and Dean found a man who was trapped there. They asked Ripley to send a rescue elevator, but Ripley refused to cross the fire line. Andy ignored his orders and activated the elevator. They dragged the man on and Jack sent Dean down with him while Jack himself stayed to close the rest of the fire doors.

On their way down the stairs, Ben and Travis came across the injured Molly. Travis, believing Molly had a better chance, told Ben to save her.

Jack kept talking to Andy as he closed the fire doors until they lost contact right before an explosion shook the building. ("Not Your Hero")

After the explosion, Andy ignored Ripley's orders to go back upstairs after Jack.

Ben dragged Molly down the stairs. On their way down, she started gasping for air and he was forced to use the needle from an EpiPen to stabilize her. Then he picked her up and carried her the rest of the way.

On her way down, Vic found Travis, who was unconscious by that point. She checked and he still had a pulse. Vic was able to wake him up and then started dragging him downstairs.

Ben passed Dean on the steps and sent Dean up to get to Travis.

Maya and Andy entered the floor where they knew Jack was and attached themselves to each other so they could explore the floor without getting lost. They heard a PASS device beeping and knew it must be Jack's, so they began tracking it in the low visibility.

Dean found Vic dragging Travis down the steps. She told him to help her with Travis because Maya and Andy were already with Jack. They got Travis out shortly after Ben got Molly out. Both of them were sent to the hospital.

Maya and Andy were able to use the sound of Jack's PASS device to find him. They freed him from under some rubble and then the three of them evacuated together.

At the hospital, both Travis and Molly had surgery. Molly, unfortunately, died in surgery, but Travis survived. ("No Recovery") 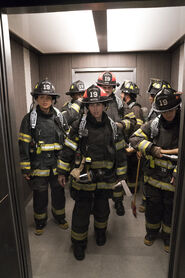 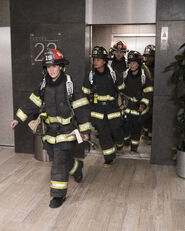 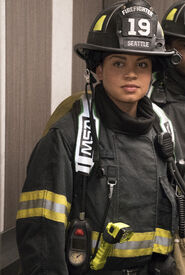 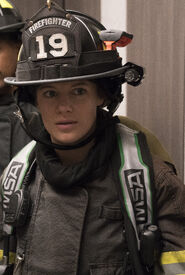 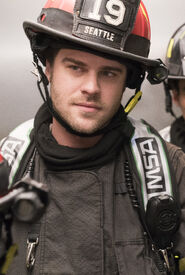 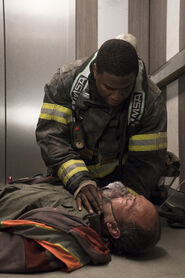 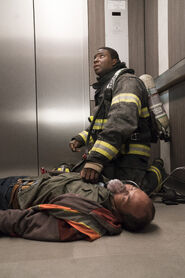