Stephanie Kemp is a nurse at St. Ambrose Hospital who dated Sam Bennett for a time.

When Debra Diamanti went into labor, Stephanie attended to her as she labored, reassuring her that everything would be okay. ("Aftershock")

Stephanie came down to the ER to attend to Pam Reiter, who was in labor. Pam inadvertently revealed to Stephanie that Sam had previously dated Addison. ("You Don't Know What You've Got Till It's Gone")

When Charlotte went into labor, Stephanie started off attending to her, but tried to leave when her shift was ending. However, Charlotte manipulated her into staying until the delivery was completed. ("Full Release")

Stephanie attended Jake and Addison's wedding at Sam's date. However, at the wedding, he slept with Naomi, resulting in her pregnancy. Despite cheating, he continued to see Stephanie. He later broke things off with her and she knew it was because of Naomi. ("In Which We Say Goodbye")

Stephanie and Sam starting dating after Addison chose Jake over him. ("Aftershock")

Stephanie was upset with Sam for not sharing any information about his past relationships. He talked to her and said he liked her and didn't want to be the guy she talked about to the next guy. ("Good Grief")

Stephanie was shocked to learn that not only had Sam dated Addison, but had been friends with him for over 20 years and lived next door to him. He hadn't mentioned anything about Addison to her. Sam talked to Stephanie about Addison and assured her that he and Addison were done. When Stephanie learned it had ended because she turned down his marriage proposal, she was even more upset. She told him she thought he was one and felt stupid for thinking that so early on. She said he was fantastic, but then said goodbye. ("You Don't Know What You've Got Till It's Gone")

They ran into each other again when Sam came to visit Charlotte, whom Stephanie was taking care of. They awkwardly greeted each other. When Sam came to visit a second time, Charlotte watched them interact. Once Sam was gone, she asked Stephanie if she was still into Sam. Stephanie refused to answer, but Charlotte asked her if she'd give Sam another chance. When Charlotte later told Sam to get back with Stephanie, he said he could make his own choice, but then told Stephanie he chose her and said he wouldn't make the same mistakes again. ("Georgia on My Mind")

Despite Sam attending Jake and Addison's wedding with her, Sam slept with Naomi, resulting in her pregnancy. Despite this, she and Sam continued to see each other without her knowing he'd cheated. Three months later, Sam started to break up with Stephanie. She tried to leave before he said it because she didn't want him to see her cry, but before she left, she told him the next time he got a second chance with a woman, he should mean it. She knew he was leaving her for Naomi, whom she said she actually liked when she met her. ("In Which We Say Goodbye")

She had a past boyfriend named Josh whom she lived with. He had a habit of getting high and cheating on her, so she kicked him out and threw herself into her work. ("Good Grief")

While Charlotte was confined to bed rest during the remainder of her pregnancy after the delivery of Georgia, Stephanie quickly became the only nurse who could tolerate her. ("Georgia on My Mind") During the delivery of the remaining two triplets, Stephanie stayed past the end of her shift at Charlotte's prompting. ("Full Release")

She is a floor manager nurse at St. Ambrose Hospital. Addison said Stephanie was one of the best labor and delivery nurses she'd ever worked with. ("You Don't Know What You've Got Till It's Gone")

Before coming to St. Ambrose, she worked at UCLA. 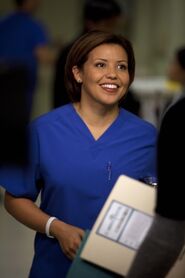 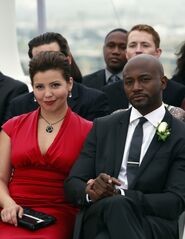 Retrieved from "https://greysanatomy.fandom.com/wiki/Stephanie_Kemp?oldid=270254"
Community content is available under CC-BY-SA unless otherwise noted.