Edit
watch 03:36
Wiki Targeted (Entertainment)
Do you like this video?
Play Sound

All You Need is Love

Steve liked Hardy Boy books. Steve had his first parentless Halloween in 1991. He trick-or-treated with his sister. It was dusk and drizzling and they decided to go to Mr. C's house. Mr. C lived down the street from them and was famous for two things--dentures and the Halloween house. Each year he transformed his colonial style home into a haunted-palooza, and himself into Monster C. Steve had a longstanding theory that Monster C was simply Mr. C sans the dentures. And as a young scientist/future doctor he was excited to check out the inside of his mouth and the state of his toothless gums. However, he opened the door as a full-toothed bizarro version of Bozo the Clown popped out from the spider web, frizzy red hair and all. And it was then that they realized that the "C" in Monster C stood for clown. Cindy was afraid of clowns and ran screaming from the house. He claimed not to be afraid, but he ran with Cindy. Unfortunately, a boy named Mitch Donovan, who was egging Mr. C's car, saw them and continued to call Steve, Scarecrow Steve all the way through high school.

On his first day, he was assigned to Cristina Yang. Cristina took the group on a tour of the hospital and used the same new intern speech that Bailey had used for her class to introduce them to the rules. However, her speech was derailed when her pager didn't go off as she told the interns to move when she moves.

Steve worked in the clinic for a day. He asked if they'd get to do any procedures on their own, but Bailey said they would not. ("Love/Addiction")

Megan told Steve that Henry, presumably another intern, was observing in Tricia Hale's surgery when Mark Sloan announced to the whole OR that Izzie Stevens and George O'Malley had broken up. ("Forever Young")

When the navigational computer broke while Mary Daltrey was having surgery, Derek sent Steve to go to the desk and ask anyone if they knew anything about computers. Nobody came, so Steve went back. Steve later held the probe steady while Derek helped Rose fix the computer. ("Crash Into Me, Part 2")

When Cristina was stabbed by an icicle, Steve and Dani treated her, though she berated them because they didn't know how to read the x-ray. ("Dream a Little Dream of Me, Part 2")

Frustrated that the residents weren't teaching them, the interns began to practice IVs on each other. When Lexie Grey found out that some unclaimed bodies were being preserved for medical research, she took a few of them for the interns to practice things on. However, the residents also took the cadavers, so they continued to practice on themselves. ("Rise Up")

Steve was given an epidural so they could practice that. They forgot to put in a catheter when they did it, so he peed himself. They suggested they could take out his appendix as practice, but he refused. He was then confined to a bed until it wore off. Steve was later put on probation with all the other interns. ("In the Midnight Hour")

The day that the winner of the solo surgery was to be announced, Steve, Graciella, Ryan, and Lexie waited outside the room and made several false announcements the residents eagerly waited to hear. ("All By Myself")

Wanting to remind the interns, who were still on probation, why they loved medicine, Izzie Stevens put together a medical contest for them, which involved diagnosing patients based on symptoms presented to them and draping patients for specific surgeries. Steve, Ryan, and Lexie reached the finish line at the same time, but Lexie gave the correct diagnosis, so she was declared the winner. ("Before and After")

When the merger between Seattle Grace Hospital and Mercy West Medical Center was announced, the interns all began working around the clock, because they were scared to go home out of fear that they'd end up getting cut from the program. He survived the first round of layoffs. He told Lexie Grey that while he was safe, Megan Nowland was cut. Megan was pregnant with his child. ("I Always Feel Like Somebody's Watchin' Me")

When Thatcher Grey came in in need of a liver, Steve drew some of Lexie's blood to see if she was a match. ("Tainted Obligation")

When Derek was looking for someone who was a natural at microsurgery, Steve gave it a shot, but failed. ("Give Peace a Chance")

Steve participated in the documentary someone was making about doctors from the hospital. ("Seattle Grace: On Call")

During the hospital shooting, Steve was among the doctors locked down in peds. ("Sanctuary")

When Owen Hunt got funding to do a special trauma certification for the residents, Steve assisted him, helping him set up and handing out cards with symptoms. ("That's Me Trying")

During Pierce and Megan's break, Megan slept with Steve and Steve accidentally sent an email to people about their hookup, including Pierce. According to Ryan, Pierce wants to kill Steve, and Steve loves Megan, but it appears that Steve has punched Pierce, with Pierce having a black eye and Steve having a bloody hand. ("Stand By Me")

Steve was married to Megan, by his uncle, at the back of the hospital, with Graciella Guzman as a witness. But however, he found out that Megan actually did a paternity test, without his knowledge. While Megan opened the envelope containing the results, he got into a fight with Pierce. Despite finding out that Megan's baby was actually his, he divorced her. ("Seattle Grace: On Call")

Later, Steve mentioned a new girlfriend while operating. ("All You Need is Love")

Steve got on with all interns and used to get on with Pierce before his break-up with Megan. When Cristina was stabbed with an icicle he (and the other interns) took pictures on his phone. He is one of the many who loves Joe and Emerald City Bar.

At Halloween, Dr. Yang informed the interns that they were to dress up for Halloween, so Steve bought a clown costume. He expected Cristina to be impressed but when she wasn't, he came to the conclusion that she had a fear of clowns.

Steve was one of Cristina Yang's interns. When Cristina was stabbed, he could not read the X-ray as he said she always read them.

Steve was part of the intern group that operated on themselves, however, Steve specifically was not present during the surgery, as he had been given an epidural a few hours prior and was unable to walk, and had also wet himself. He is an aspiring neurosurgeon. His favorite surgery that he scrubbed in on was a craniotomy with Dr. Derek Shepherd when he held a probe inside someone’s brain.

Steve is one of the better interns, in Izzie's intern bowl, he tied for second with Ryan Spalding and just lost to Lexie Grey.

Steve became a second year resident and survived the first round of layoffs when Seattle Grace Hospital merged with Mercy West Medical Center. 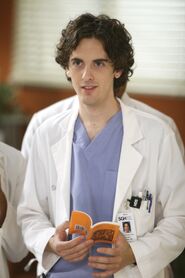 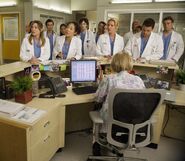 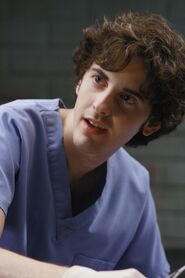