Pruitt vents the roof to free the others

I'll Be Seeing You

Station 19 was called out to rescue some people who were trapped in a storage unit. At the scene, they learned that the man running the storage facility, Keller, didn't know anyone was trapped. He tried to stop them from searching the facility, asking if they had a warrant, until Maya informed him that they didn't need one because someone had called for help. They split up into teams and began searching for the trapped people.

They finally found the unit and heard the men inside complaining that they couldn't breathe, which was surprising as the units weren't airtight. They forced open the door, revealing that there was smoke inside as one of the members of the band using the unit to practice had been smoking inside. The band members were led to safety and the firefighters started to put out the fire. They realized there were more people in the storage unit and began to search for them to get them out.

Travis and Emmett were sent up to ventilate the roof, but found it was too unstable to do so while they attempted to breach the walls instead. They struggled with that due to concrete walls. Keller finally admitted that there might be a person inside not on the list as one guy paid him extra to live in one of the units. The team went back inside to search for him, checking each unit one at a time.

Jack and Andy found a storage unit filled with propane tanks. They put out some fires in there, then blocked the vents to prevent the fire from spreading back into there, giving the firefighters more time to exit. While they were doing that, the fire came back into the unit, setting the tanks on fire.

Outside, Luke was taken to the PRT, where they had to call Maggie on video to talk them through a pericardial window.

With visibility inside worsening, the firefighters struggled to find the exit. They were still working outside to breach the walls. Inside, the firefighters searched around for a way out as their oxygen started to run low. As she walked around, Andy began to draw arrows on the walls to show where she was headed.

Outside, Sullivan turned over command of the scene to Maya and went inside to find Andy himself, against protocol. Inside, he found a firefighter whose PASS device was beeping and told him to follow the hose out to safety. Then he found Andy, but their path out was blocked by burning debris, forcing them to find another way out.

Pruitt, who had been listening at the station over the radio, arrived at the scene. He took his turnout gear out of his car and put it on. He then told Maya to move the ladder so he could climb to the roof. She told him it was too unstable, but he repeated his request. He convinced her that he needed to do what was right for the team, each member of which he'd hand-picked. Maya agreed and moved the ladder.

Pruitt left a final message for Andy with Maya before climbing up to the roof. He took an axe and started breaking through the roof. After a few moments, the roof gave way, ventilating the building as Pruitt fell to his death.

Inside, with visibility improved, the other firefighters started to walk outside. They came out and saw those outside looking horrified as they heard the bells sounded for a fallen firefighter and realized what had happened. 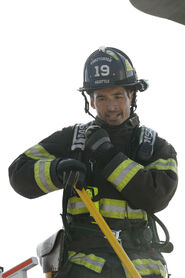 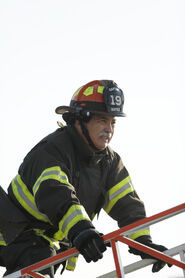 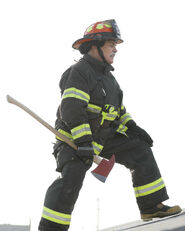