watch 01:29
Grey's Anatomy Lore: Susan Grey
Do you like this video?

The Name of the Game

The Other Side of This Life, Part 2

Susan Grey was the second wife of Thatcher Grey and the mother of Lexie Grey and Molly Grey-Thompson.

She came to the hospital with Molly when she was pregnant and the baby was diagnosed with a congenital diaphragmatic hernia that was prohibiting her lung development. Addison operated to place a balloon that opened her airway and allowed her lungs to develop properly. ("The Name of the Game")

When Molly had to have an emergency c-section, Susan was there in the OR with her. When the baby needed surgery right after she was born, Susan stayed by Molly's bedside and assured her it would be okay. ("Don't Stand So Close to Me")

Four days after Laura's birth, both Susan and Molly had the flu, so they couldn't visit her. ("Six Days, Part 1")

While she was at the hospital with Meredith, she met Meredith, whom she recognized because she looked just like her sisters and her mother. ("The Name of the Game")

Susan and Thatcher came to the hospital after Ellis died, wanting to check on Meredith and make sure she was okay. She invited Meredith to dinner. Derek convinced Meredith to move the dinner to her own house and he said he'd be there to support her. Cristina also agreed to interrupt 45 minutes in with a fake crisis to get her out if she needed. During the dinner, the power went out, so Thatcher went to fix it. Derek then left to check on him, leaving Meredith and Susan alone together. They started chatting amiably and when Cristina arrived with a crisis, Meredith said it wasn't needed, not knowing her crisis was real. At the end of the night, Susan and Meredith said a happy goodbye. ("Scars and Souvenirs")

After the dinner, Susan began to bring Meredith groceries. Susan also said she'd like to sit down with Meredith and talk and get to know her better, but Meredith rejected her, telling her to stop. Susan later came to the house and told Meredith she was just trying to be with her any way she could. Meredith was delighted, saying she'd never known overprotective from a mother, just overbearing. She said it was okay for Susan to keep doing what she was doing. ("Time After Time")

She came to the clinic complaining of long-lasting hiccups and acid reflux. She said it had been getting worse. They gave her chlorpromazine, which stopped the hiccups, and sent her home. She came back when the hiccups came back. They scheduled endoscopic gastroplication. They did the procedure and Susan hiccuped the entire time. After her procedure, she was taken home. ("The Other Side of This Life, Part 1")

Susan ended up back in the hospital with a fever. They suspected she had an infection, so they ran tests and gave her IV antibiotics. They then placed a central line so she could continue her antibiotics at home. She ended up in the hospital with cramping pain. She was septic and had a toxic megacolon with a perforation and had to be rushed into surgery. Despite their best efforts, Susan died in surgery. ("The Other Side of This Life, Part 2")

Susan was a family person. It was the most important thing in her life. It was even so important to her that she single-handedly tried to repair the relationship between Thatcher and Meredith.

Susan is the second wife of Thatcher Grey, following the divorce from Ellis Grey due to the affair Ellis had with Richard Webber during their residency, in which Ellis left Thatcher.

Susan is very protective over her daughters, likening herself to a mother lion. When Molly was hospitalized, she admitted that she roared a little. ("The Name of the Game")

She was Meredith Grey's stepmother. Meredith often referred to her as her "surrogate mother." Susan was always aware of Thatcher's first wife and daughter and reached out to Meredith, offering to include her in their family and encouraging her to develop a relationship with Thatcher.

At first, Meredith was resistant to Susan's desire to mother her, claiming she already had a mother, but when Ellis Grey died, Susan reached out to her again and again. Meredith grudgingly accepted it and as a result, the two bonded and became friendly. Meredith was not used to the fact that she now had a 'mother again' when it came to Susan looking after her, such as buying her groceries every week. 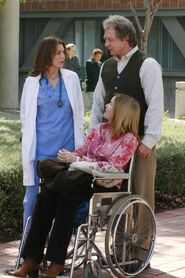 Retrieved from "https://greysanatomy.fandom.com/wiki/Susan_Grey?oldid=318534"
Community content is available under CC-BY-SA unless otherwise noted.