A Hard Pill to Swallow

Sarah Rafferty
Suzanne Britland is a woman who developed some mysterious symptoms following an appendectomy.

Suzanne was post-op day three on an appendectomy, but still in the hospital because she had a high white cell count and fever, but no sepsis. She admitted to having a sore throat during rounds, but hoped to get some antibiotics and get discharged that day anyway. Her daughters were missing school because they refused to leave the hospital without her after losing their father less than a year prior after a doctor said he'd be okay and sent him home. They did a CT and during the CT, she crashed and they were forced to do a pericardiocentesis in the CT booth to relieve the cardiac tamponade. They sent the fluid to the lab for testing, but had to admit they didn't know what was going on with her. ("A Hard Pill to Swallow")

Desperate, Andrew called in Lauren Riley, an expert diagnostician from UCSF. After having Maggie do a pericardial window to relieve the pressure of the fluid around her heart, Lauren said they need to withdraw all treatment, so that they could see the symptoms without the medications. Suzanne was reluctant, but ultimately agreed to let them withdraw all treatments. ("Save the Last Dance for Me")

Suzanne's previously treated symptoms started to appear again, causing discomfort. They continued to run tests, which still didn't show anything conclusive. Finally, after Andrew noticed that Suzanne's platelet count had dropped to almost zero, they did a bone marrow biopsy. That showed hemophagocytosis, a result of macrophage activation syndrome, a known complication of Still's disease, which she had prior to the appendectomy without knowing it. They got her on high-dose steroids, which caused her to feel better almost immediately and said she'd be referred to a rheumatologist to manage her condition. ("A Diagnosis")

She was married until her husband died.

She once kissed a boy named Scott Thompson because he gave her a Styx record. ("Save the Last Dance for Me")

With the recent death of their father, her two daughters were very clingy with her, specifically Mei Li, who was adopted and had recently been diagnosed with attachment disorder. Her sister also came to the hospital to help her and her daughters. 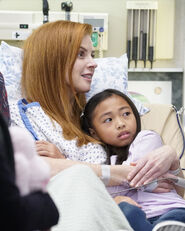