Callie and Owen talk at the start of the party

The dinner party took place somewhere in late 2011. It was first mentioned by Henry when Bailey was treating him with Eli by her side, as he wanted to know if he'd be out in time to take the fish for the party out of the marinade. A problem arose when it turned out Bailey hadn't invited Eli as she wanted to end their relationship, but thanks to Henry, Eli knew there was a party. Bailey then invited him. Throughout the day, Teddy asked Bailey to dump Eli before the party in order to maintain a pleasant atmosphere. Bailey eventually did so, although she pretended Eli was stuck at the hospital to explain his absence.

At the party, Arizona asked Callie for official documents that said Sofia was her daughter.

Teddy served some appetizers on-screen while the guests drank their wine, but the actual dinner happened off-screen. 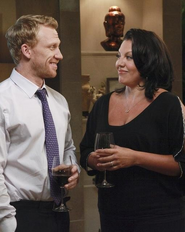