Teddy and Owen are married

Teddy and Owen's Wedding is the wedding between Teddy Altman and Owen Hunt.

Some time after the birth of their daughter, Owen proposed to Teddy in an on-call room with his mother's ring, which she'd given to him the day Allison was born. ("Help Me Through the Night")

Not long after that, Teddy panicked because she had lost the ring. After frantically searching for it, she and Owen discovered that Leo had swallowed it after it fell in his food. They waited for it to pass through his body and then retrieved it. ("A Hard Pill to Swallow")

While struggling with her warring feelings for Tom and Owen, Teddy went to Owen and suggested they get married quickly. ("Sing It Again")

However, before they could do that, Owen received a voicemail during surgery that was a recording of Tom and Teddy having sex. He canceled the wedding, telling his mother that he'd been pulled into emergency surgery and they'd have to do it another day. ("Put on a Happy Face")

Later, Teddy told Owen that Allison hadn't just been her friend, but her girlfriend and the love of her life. Owen was upset because he felt that they'd named their daughter after a lie. ("No Time for Despair")

After Andrew's memorial service, Owen noticed Teddy sitting motionless in the same spot where she'd been for the service while he was on his way to his car. When she didn't react at all to his presence, he picked her up and took her home. ("It's All Too Much") She spent the day in a trance, but after some time, started to come out of it. ("In My Life")

Soon after that, Owen reached out to Teddy and asked her to be friends again, saying he wasn't sure he could off any more than that. ("Sorry Doesn't Always Make It Right")

After a difficult day, Teddy started to panic about Meredith's condition and tried to kiss Owen, but he stopped her and said she needed to feel what she was feeling. ("Good as Hell")

On December 25, 2020, at a Christmas celebration at Meredith's House, Owen used a machine to make artificial snow fall in the backyard and then proposed to Teddy there. She accepted his proposal. ("Someone Saved My Life Tonight")

Months later, once the pandemic died down, Teddy and Owen planned to get married in Berninger Park. Megan and Farouk came to Seattle for the wedding and Father Christopher from Evelyn's church came to marry them. However, before he could pronounced them married, he was hit by a couple on a tandem bike, seriously injuring him. Teddy and Owen left the wedding to ride in the ambulance to the hospital with him.

Teddy and Owen both operated on Father Christopher, but he died of his injuries. Despite this, Megan and Owen planned to complete the nuptials at Emerald City Bar. Megan got ordained online so she could perform the ceremony and she did so in the presence of Owen's family and some of their friends. ("Here Comes the Sun") 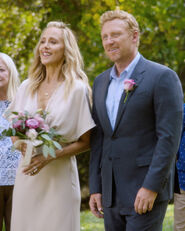