A train derailment brings many victims to the ER

The Trail Derailment is an accident in which a train bound for Vancouver crash, injuring and killing many people.

A train on its way to Vancouver carrying over 300 passengers crashed. Many were killed on impact, but others survived and were brought to Seattle Grace Hospital to be treated.

Tom Maynard and Bonnie Crasnoff were sitting across from each other and ended up impaled on the same pole. The doctors did multiple tests to determine how best to separate them in order to treat their injuries. When they determined that the pole had sliced through Bonnie's aorta and her spine was severed, they decided to do what they could to save Tom. The two were separated and they gave one last-ditch effort to save Bonnie before moving on and saving Tom.

Brooke Blanchard and Jana Watkins, best friends, each pregnant with one of their children, were also in the crash. Jana had only a minor cut that was stitched in the ER, but Brooke was seriously burned. Because of her burns, Brooke was taken into the OR for a c-section while Jana gave birth. Both moms and both babies were doing well afterward.

Mary had some cuts on her face and pain on one side. She had to wait several hours to get an x-ray to see if anything was broken before she could go home. An x-ray showed a broken rib, so she was given pain meds. Her friend, Yvonne, who had come to the ER with her, impatient at how long it was taking, collapsed in the ER. She'd been bleeding internally for several hours. They attempted resuscitation, but were unable to save her. 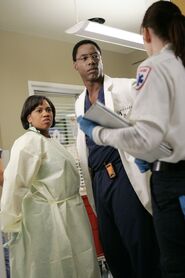