Rushi Kota
Vikram Roy was a surgical intern at Grey Sloan Memorial Hospital until he was fired for causing the death of a patient.

Vikram came into Grey Sloan Memorial Hospital for an interview to be considered for an internship. During his interview, he said that he had to keep his phone on him in case he got a call from Massachusetts General Hospital, his first choice. However, when they sent him a rejection during the interview, he quickly changed his mind and sung the praises of Grey Sloan Memorial and Seattle. ("Ain't That a Kick in the Head")

Vik attended the new intern mixer at the hospital, where Richard gave a speech about them starting their work as doctors. During the party, Meredith Grey was celebrated as she learned she had been nominated for a Harper Avery Award. The new interns then walked around the hospital, in awe that they worked there and so did Meredith Grey. ("Come on Down to My Boat, Baby")

When a roller coaster derailed at a fair, Vik and Taryn tended to Dean Parson, who was injured while pushing kids out of the way. They noticed free fluid in his abdomen and he was taken to surgery, despite Amelia ordering a CT. When Taryn informed Amelia of this, Amelia brought the CT into the OR to do the scan. They found a bleed in his brain and Amelia did a craniotomy. ("Who Lives, Who Dies, Who Tells Your Story")

When Vik came into the OR to replace Taryn, he was instead sent out to find her and Jo. He did so and stayed with them until Alex and Meredith arrived and told them they could leave. ("1-800-799-7233")

Vik decided to sneak into the presentations for the surgical contest. While he was there, he took a cookie from Arizona's tin before Bailey discovered he was there and pulled him out. Despite this, he later lied and said he hadn't had any of the cookies in order to enter a contest to get to scrub in on a Whipple. He later went to a patient who needed a central line and started to freak out due to the weed. He ended up backing into a cart and falling, which caused him to get stabbed in the arm with a scalpel. When Richard learned Vik had lied about the cookie, he fired Vik for endangering a patient. ("Judgment Day")

After Vik got fired for endangering patients while high, he hired his brother, Sanjay to represent him as he sued Grey Sloan Memorial Hospital for wrongful termination. ("Bad Reputation")

Vik agreed to drop the suit and return to work if he got paid for the weeks he missed plus a formal apology from Bailey. Bailey initially resisted, but at a subsequent meeting, Bailey told him he was lucky to have the experience of learning from the doctors at Grey Sloan. She agreed to hire him back with a one-year probationary period. If he didn't screw that up, she'd make him an amazing surgeon. He accepted the apology. ("Fight For Your Mind")

After his return, as promised, he had to stay by Bailey's side. When Matthew Taylor came in after a car accident, he helped operate on him to remove his spleen. When he learned that April was also in a car accident and it wasn't looking good, he was upset because he said he liked April. ("Cold as Ice")

When Lila's mother collapsed at her wedding, Vik met them at the ER to help treat her. ("All of Me")

When Barry Clemens came into the ER with abdominal pain, Vik ended up on the case. When an x-ray showed a large object in Barry's rectum, Vik bet that it was a shampoo bottle. He was also surprised to learn that it didn't mean that Barry was gay as the male pleasure spot is inside the rectum. Later, in Barry's surgery, Vik spotted a bleeder. Despite being told by Richard to wait, Vik cauterized it, which caused the bottle of hair spray to bounce around the OR, injuring Vik and was possibly the reason Barry died in surgery. ("With a Wonder and a Wild Desire")

Day in the ER and Getting Fired[]

After Alex was named interim chief, Vik had to follow him around. Vik helped clear the ER of family and the police. When Tad came in with a nosebleed, Vik parked him in a bed and said he'd come back to pack it. When he returned five hours later, Tad was still bleeding and coughed up blood. Tom stepped up and helped him treat Tad, but it was too late and Tad died. When Koracick told Vik to call time of death since Tad was his patient, Vik refused and left the room saying that he was just an intern and Tad's death wasn't on him. Alex came to the locker room later and fired Vik, citing his lie about having taken care of Tad and his inability of take responsibility for his neglience. ("Gut Feeling")

After April had a day with several cases that made her question God and her faith, she went to the bar, where Vik came to sit next to her. The two ended up leaving together. ("Personal Jesus")

They continued to sleep together, but with no contact during daylight. Despite this, he fell asleep at her place more than once. ("Harder, Better, Faster, Stronger")

He took advantage of their relationship to get better opportunities at work. ("You Really Got a Hold on Me")

He was a surgical intern at Grey Sloan Memorial Hospital until he got fired because he attempted to treat patients while high. He was hired back when he hired his lawyer brother to represent him in a wrongful termination lawsuit, although he was to work under Bailey's close supervision. However, he was fired again by Chief Alex Karev when he neglected a patient with a nosebleed for hours, resulting in the patient's death. 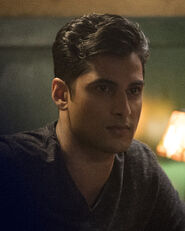 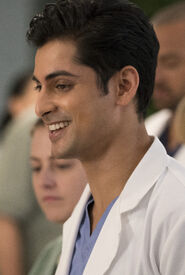 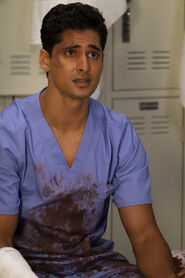