We Didn't Start the Fire

And Dream of Sheep

Vincenzo DeLuca is the father of Andrew and Carina DeLuca.

In a manic state, Vincenzo operated on seven patients in a row with no sleep or food. Four people died because of him and he got away with it because of his connections. ("Shelter from the Storm")

Coming to the United StatesEdit

When he had some troubles, his daughter, Carina came back to Italy to help him sort things out. ("Momma Knows Best") When she eventually returned to the US, she brought him with her, surprising his son, Andrew. ("We Didn't Start the Fire")

Upon his arrival in the United States, he insisted on going to the hospital where his children work to present his research in the hopes of getting funding. He revealed that he'd developed an external gestational sac for babies who would otherwise die from being born prematurely. He was already using it on sheep successfully. Carina talked to Alex and explained her father's unsteady mental health, but Alex decided to fund the project anyway. After getting his funding, he invited Andrew to join him in his research, believing it would put him on more equal footing with Meredith. ("Blood and Water")

Vincenzo's research continued until a lamb died. He felt it was a natural result of the research and nothing of concern, and scoffed at the suggestion that he was moving too quickly in his research. When he learned that Elizabeth Hall might lose her baby because she needed a hysterectomy, he went to the Halls directly and said they could use his gestational sac. They wanted to, but they were quickly told that it wasn't available. Instead, Lizzie's baby was delivered and her uterus removed. Vincenzo still believed his way would have worked. However, it made his son realize that he was reckless. Alex then cut off his research funding, so Vincenzo arranged to have the remaining lamb sent back to Italy. ("And Dream of Sheep")

He had a wife with whom he had Andrew and Carina. They divorced and she moved to the United States. He described her as controlling and blames her for creating a rift between him and his son.

Vincenzo raised his daughter Carina in Italy while his ex-wife moved to the United States with their son Andrea.

Vincenzo is a surgeon. He started carrying out research on external gestational sacs at Grey Sloan Memorial Hospital but it was terminated when his reckless behavior made Alex decide to cut off funding. Vincenzo then set out to continue his research back in Italy. 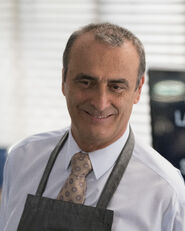 Retrieved from "https://greysanatomy.fandom.com/wiki/Vincenzo_DeLuca?oldid=318359"
Community content is available under CC-BY-SA unless otherwise noted.