These Ties That Bind

Beat Your Heart Out

Dixon first came to SGH to work on the case of Clay Bedonie, who had had a heterotopic heart transplant six years prior and needed to have his piggybacked heart replaced. Richard wanted to have Bailey woo her so she'd accept the job as head of cardiothoracic surgery. At the end of the day, she said she knew she'd been manipulated into giving Clay his donor heart back and said she didn't really like Seattle Grace because of that. ("These Ties That Bind")

She returned to Seattle Grace and Cristina was assigned to woo her as Richard wanted her to be the new head of cardiothoracic surgery. She worked on the case of Holly Anderson. At the end of the day, she told Richard to have the board make her a better offer. ("All By Myself")

Dixon later returned again to work on Stacy Pollock. After Stacy's surgery, Dixon was unsettled when Bailey proposed using a backpack without consulting her first. When Stacy's parents hugged her enthusiastically, she abruptly left the room. Bailey and Cristina found her in a lounge, trying to sooth herself by tightening her lab coat around her body. Bailey and Cristina helped her by applying pressure to her body in a hugging motion, which allowed her to calm down. ("Beat Your Heart Out")

Dr. Dixon was described as "a little off" by Bailey, Karev, and the Chief; however, she is autistic, having Asperger's syndrome, an autism spectrum disorder formerly considered separate from autism. Bailey characterizes this as "significant impairment during social situations," explaining her bluntness and lack of sarcasm comprehension. Another characteristic of autism is specific and repetitive behaviors and interests. In this case, the heart is Dr. Dixon's special interest.

She demonstrated her knowledge of the heart by relaying many facts, usually trivial, to people and explaining surgical procedures technically, even if the patient was unable to understand. She refused to let Alex refer to a heterotopic transplant by its colloquial name (piggy-back transplant).

She dislikes physical contact, shown when a patient's family tried to hug her and shake her hand. She had a panic attack and retreated into a lounge trying to apply pressure, asking Bailey and Yang to do so as well, effectively hugging her, to depress her sympathetic nervous system, slowing her heart rate and metabolic rate. She related this to how cows are treated before they are slaughtered.

Virginia uses her own lab coat and also has her head covered completely during surgery. Only her eyes are visible and face is covered by a standard surgical face mask, which is consistent with Asperger's syndrome as some may have traits of obsessive–compulsive disorder.

After her first visit to Seattle Grace, she disliked Bailey after she felt she was manipulating or making fun of her; however, she seemed to forget about it by her next visit.

She is an extremely skilled surgeon, Karev remarking that she is the fastest that he has seen doing surgical procedures.

In her second visit to Seattle Grace, Dr. Webber approaches her about a job, and she only tells him "Have your board make me a better offer". 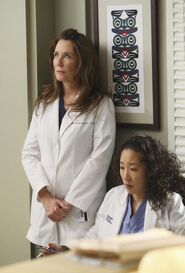 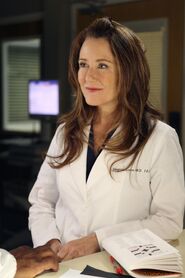 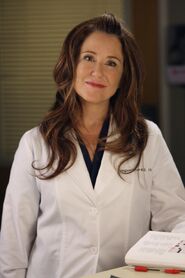 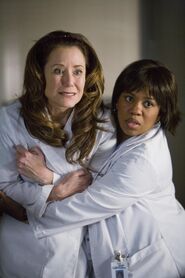 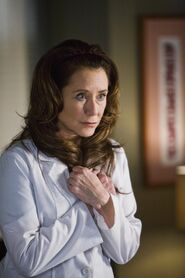 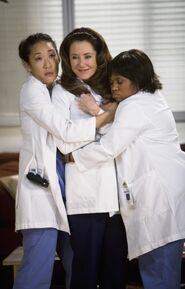 Retrieved from "https://greysanatomy.fandom.com/wiki/Virginia_Dixon?oldid=269959"
Community content is available under CC-BY-SA unless otherwise noted.