Worlds Apart is the tenth episode and mid-season finale of the second season and the 19th overall episode of Private Practice.

Pete's girlfriend, Meg, returns to Los Angeles and notices that Pete and Violet are considerably closer. Kevin questions the direction he and Addison are headed in as a couple. Cooper treats a young diabetic boy with a mysterious past and Charlotte and her team of Pacific Wellcare doctors continue to siphon business away from Oceanside Wellness.

Porter, 12, came into the practice for a checkup. He had diabetes and was on the road with his father. Cooper looked at his insulin pump and diagnosed an infection around the site. He hadn't be able to keep it clean because he'd been sleeping the car with his father. His father was told he'd need a new insulin pump, which had to be ordered and would take a few days. When Cooper ran the serial number on his current pump, he found out it was registered to Evan Dawson. He thought the kid had been kidnapped. It turned out his father had taken him because he said his mom's boyfriend was hitting him. While talking to Cooper, he had a seizure because his blood sugar dropped. At the hospital, he had a new pump placed and he stabilized.

Carley came into the practice for an exam with Addison. She was concerned because she'd had more than her average number of sexual partners. She'd been putting herself through school working as a call girl. She was healthy, but later called Addison after being hit by one of her clients. When they arrived at the hotel, she found her severely injured, so they called an ambulance. She had a tension pneumothorax due to fractured ribs puncturing her lung. Addison relieved the pressure and Carley was taken to the hospital. During her hospital stay, Addison told Carley she couldn't be her doctor anymore because of what she was doing.

Claudia, 35, had stage II adenocarcinoma. She was in full remission after chemo and radiation. She decided she wanted a baby, so Naomi was called in to get her pregnant. 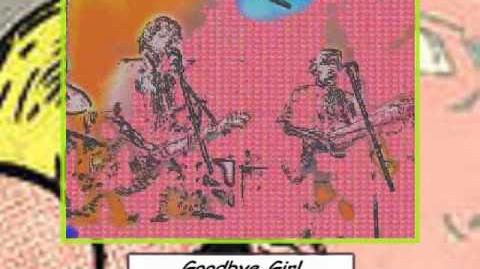 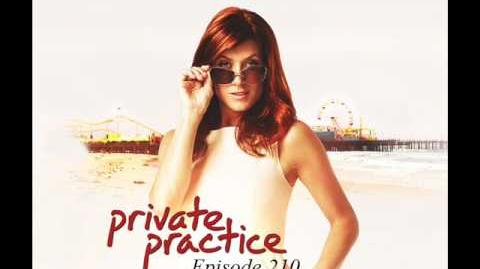 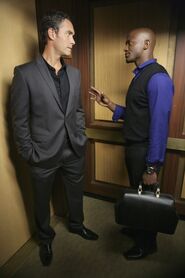 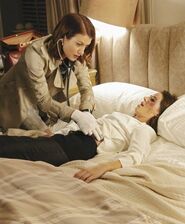 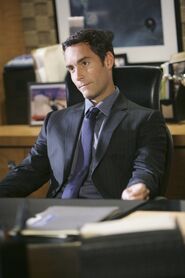 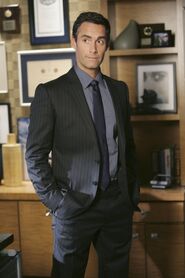 Addison: It's only a matter of time before Charlotte's patients see beyond the French-press coffee and find a sea of overrated doctors with questionable ethics.

Addison: I can't believe she's doing this. She grew up with nothing. Now she makes more money in a month than her parents do in a year. The worst part is that she doesn't seem to be bothered by it.
Violet: Well, she's repressing emotion. It's a defense mechanism to help her cope with what she's doing. Most prostitutes have low self-esteem. Many were victims of sexual abuse.
Cooper: I've met a few call girls in my day. And we would discuss why they got into the trade. And it's not because they were touched inappropriately or forced to have sex.
Violet: They don't want you to believe it because it kills the fantasy. Don't kid yourself, these girls are victims.
Addison: Try telling that to Carley.
Cooper: Hey, Pete, you ever paid for sex?
Pete: Don't have to.

Kevin: Is seeing hookers a sub-specialty now?
Violet: Wait, you're seeing more prostitutes?
Addison: I am seeing women.
Kevin: Of the night.
Addison: Wait, you have a problem with this?
Violet: Yeah, I do. Look, I am all for free choice, but these girls are damaged. They can't make good choices. So, yeah, I think that if you only treat them physically, then you're just perpetuating their problem. Is this really what our practice is coming to?
Addison: Well, what should it be? Another high-end Westside clinic catering to an overly exclusive clientele? Is that what we are? This isn't exactly Hollywood Boulevard.
Kevin: And you think that makes a difference? You wanna hear the statistics on the links between prostitution and drugs? Prostitution and violent crime?
Addison: I'm not condoning their behavior. But they're not streetwalkers.
Kevin: And you think just because they're in school every day doesn't mean it's gonna lead down the same path? They may think it's temporary, but you wanna lay odds on how many are still doing it five years from now?

Violet: I think that telling about cheating only makes the cheater feel better. I think it would be a cruel thing to put on Meg. If you plan to move forward with her, nothing good can come of it. If you plan on moving forward with Meg, then you, as the cheater, need to suffer in silence for your crime. Live with the guilt and move on.

Naomi: I just wanted to let you know that I have decided to consult with Wyatt.
Addison: Naomi, this... It's wrong.
Sam: I don't believe you. After everything?
Naomi: I wanna be inspired again. After the practice, I felt like I'd lost something, like I'd given up. And I don't wanna feel like that anymore. It's just one patient.
Sam: It's not just one patient. It's a step in the wrong direction. And you take this step and soon people are gonna not call the police on kidnappers. And help patients to lie to get into hospitals. Then what are we gonna become?
Addison: Sam.
Sam: No. We are our actions. And if she sells out once, then she's a person who sells out.
Naomi: I am not selling out.
Sam: You talk about this practice. The way it's supposed to run. The way we're supposed to treat our patients. You talk about not wanting to give up. And then you're gonna go downstairs to that place, to work with that woman who is doing everything possible to undermine us, to work for that man who's more concerned about getting recognized for his work than which patient lives or dies. How is that not selling out?
Naomi: You agree with him?
Addison: I agree that once you start doing something, it's difficult to stop.

Charlotte: The police officers showed up in Evan's hospital room. You know what they found?
Cooper: Your broomstick?
Charlotte: This isn't a joke, Cooper. You tipped them off. You're obstructing a police investigation. If they found out you were involved in the disappearance, you could go to jail.
Cooper: I'll take my chances.
Charlotte: No, you won't. I covered for you.
Cooper: Why?
Charlotte: Because now we're even.

Addison: You were right. I don't know what it's like to walk in your shoes. But don't kid yourself, Carley. This isn't just a means to an end. Because once you do this, it's who you are. We are our actions. They define us. And you may think that you're a med student paying for college, but right now you're a hooker.

Violet: I slept with Pete. There, I told you.
Cooper: You know, I expected better from you.
Violet: I'm sorry, it just happened.
Cooper: But you know what, if that's how you wanna play it, fine.
Violet: What are you talking about?
Cooper: When you're ready to be mature and tell me who you really slept with, I'll be around for you, Violet.
Violet: I'm not lying to you. I really slept with Pete.
Cooper: Okay.
Violet: Where are you going?
Cooper: I don't wanna be late for my date with Angelina Jolie.

Sam: I use an inhaler.
Wyatt: I'm sorry, do you need medical attention?
Sam: No, no, it's my breathing. It gets bad when I get worked up. So I need an inhaler. When I get upset, I need it. When I work out, I need it. When I exert myself, I need it. I'm prepared to line up ten inhalers, if that's what it takes. Because if you mess with Naomi If you even think about screwing with her, I will take you out.

Kevin: I don't live here, Addison. This isn't my home.
Addison: You're mad about my ignoring your advice?
Kevin: You've never been to my house. You make fun of where I live. You pay people to clean up my house so I won't have to go back. And you won't have to either.
Addison: I did a nice thing.
Kevin: Tell me the truth, if I didn't get shot, would we still be together?
Addison: All this because of my patient?
Kevin: No, it just made me realize how you see the world. And the world that I live in isn't always about beaches and thousand-count sheets and hired help to make everything look pretty.
Addison: When you were shot, I looked after you.
Kevin: Here. In your comfort zone, so you didn't have to give up control. Because that's how you like it.

Retrieved from "https://greysanatomy.fandom.com/wiki/Worlds_Apart?oldid=296508"
Community content is available under CC-BY-SA unless otherwise noted.